Today we have a flag created by two alternate vexillogists to showcase. It is the flag of Monarchist Israel by gruff.jones and, my channel's official title card creator, Marc Pasquin: 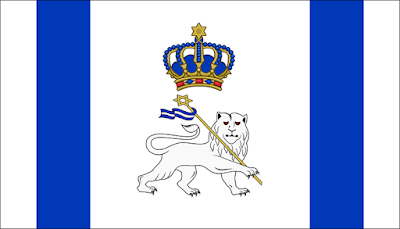 This was initially created by gruff.jones, but when people pointed out that it had a lot of crosses for a Jewish flag, Marc stepped in and added some Stars of David. Thus I am considering this flag a collaboration of the two guys. Otherwise there aren't many notes to go with the flag. It has the white and blue of the current flag of Israel, along with monarchist symbols like the crown.

When I initially shared this flag on Twitter, Simone Zelitch (author of Judenstaat) asked: "What on earth would a monarchist Israel look like?" Well, that is a good question. My preliminary research couldn't find any modern references to supporters of a Jewish monarchy. Perhaps such a flag would exist in a world where Zionism evolved into support not just for a Jewish state, but also for a Jewish kingdom. I mean it seemed all the gentiles in Europe had them, why not Israel?

Or perhaps someone who claims to be the messiah gets enough followers that he and his issue are declared the new Royal Family of Israel. Perhaps someone who knows more about Jewish history can find a better point of divergence, because I do have trouble seeing what a monarchist Israel would look like.

Honorable mention this week also goes out to Marc for his Fascist California flag.