Rewriting History for Your Entertainment 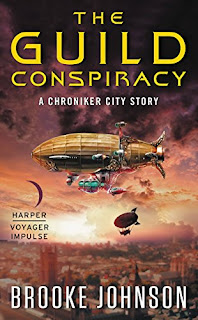 In 1882, Chroniker City did not exist. There was no known conspiracy to start a war between the British Empire and the French. There was no Guild of Engineers. There were no floating warships, no overland war machines, no taking of Calais, no battle of Amiens. There was no Chroniker University, no clockwork engineer named Petra Wade.

But I’m not writing about our world—not as it was, anyway.

History is a vast playground for the writer willing to delve into it, rich with the rise and fall of empires, conflict and tension between nations, numerous wars and battles ripe for the picking, political leaders both good and evil, and a variety of cultures spread across every possible geographical landscape, stretching back to the beginning of recorded time. With millions of stories hidden in the depths of the past, there is no limit to the number of novels you could write, whether those stories are true to history as we know it or mere speculation based on what little historical information we can find on a subject.

And altering that history opens up even more potential for story fodder. You can unravel the very fabric of the past and shift the threads to your will, unfolding a tapestry of endless possibilities. Change one thing in our history, and you have the opportunity to create a slightly different world from our own. Change several things, and it could be unrecognizable.

We writers of alternate history have the coveted key to the time machine and the means to change the course of the future. Whether that means rewriting the victors of World War II, changing the tragic fate of a historical legend, or building a city of inventors off the coast of Wales, we get to imagine how the world might be different if only history had taken a different course. We get to change the rules, and it’s up to us to see just how far that path takes us into the unknown, into the untraveled and untested waters of a different time.

What would happen if a man did build a technologically advanced city and then founded a guild of engineers to run it? What course would modern technology take? How quickly would it advance compared to our own time? Now, what would happen if a man rose to power in that city, a man with a vision for a different kind of future? What if he had the tools to see it done? What would it take to start a war between two countries already in conflict over international affairs? What would the First World War have looked like on the front lines if it had taken place thirty years sooner, with the hyper-advanced technology of the late Victorians?

How easy it is to change the course of history.

All it took was an idea—a man and his vision for the future—and by extrapolating on that idea, by exploring the consequences and asking what if, a story emerged.

But my work doesn’t end there. Writing alternate history comes with its own quirks and challenges, especially for those of us who strive for authenticity. Despite the differences in my alternate worlds, I try to include as much truth and fact as can be managed so that the story feels real. I may have changed history, but it’s still our world—a different one, to be sure, but similar enough to be familiar.

And that leads to one very important thing: RESEARCH. Lots and lots of it.

From the style of British military uniforms to the intricacies of clockwork mechanics; the street layout of a small port town to the operation of early telephones; storm patterns and shipping routes and the time of a sunrise in the early days of June—that much remains the same.

Tapping into that realism makes for some very detailed Google searches (bless you, internet) and lots of combing through historical records, maps, images, and other documents to find what I need to know to bring that authenticity to the story. Sometimes, I run into a problem—yeah, that airship flight I thought would take just a few hours to complete actually takes ten hours if I use the maximum recorded speed of dirigible flight around that time in our history—which means I just have to get a little more creative in order to make the story work within the confines of my historical rules.

Sometimes, that means fudging the details or rewriting another facet of history to fit the story. Sometimes, it means revising the story to fit history. But at the end of the day, writing with real world history, changing it, making it my own… there’s no greater feeling than figuring out how to marry fiction and reality in a way that serves both the story and the history I’ve chosen to include.

My job is to create that bridge, and hopefully tell an entertaining story in the process.

Brooke Johnson is a stay-at-home mom and tea-loving author. As the jack-of-all-trades bard of the family, she journeys through life with her husband, daughter, and dog. She currently resides in Northwest Arkansas but hopes one day to live somewhere a bit more mountainous.
Posted by Mitro at 11:00 AM