I wondering if anyone considers the existence of a democratic China being one of those what ifs up there with Operation Sea Lion. Something everyone considers ASB, even though aliens, magic nor weird science is present. Nevertheless, that is the subject we are going to talk about on today's Flag Friday: 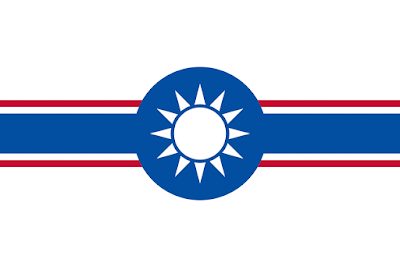 This is "Democratic China" by Reddit user JonathanCrumpet. Right off the bat, I need to talk about the background. White flags are always hard to feature because they tend to blend into the background of the post. That being said, its still a nice flag to look it. It appears Jon was using the colors of the Flag of the Republic of China (a.k.a. Taiwan), but changed the red background to white. My guess is whatever timeline this democratic China exists in doesn't want to be associated with the red background of the People's Republic.

But what about the timeline? Well there are a few potential points of divergence. Perhaps the Republic of China was more stable in the early 20th century and thus was able to avoid the warlords and other issues. Maybe the Nationalists won the Civil War and eventually evolved into a liberal republic. Of course, this could easily be a flag from a future history, one where the People's Republic finally institutes democracy (perhaps after rising sea waters that devastate Shanghai and other major cities get blamed on the Communist Party).

What timeline do you think this flag belongs in?