Map Monday: If Kamchatka was an independent country by Pavelzuk

Its rare for someone other than myself to showcase an alternate history map on their site, but it happens. Just like with today's subject: 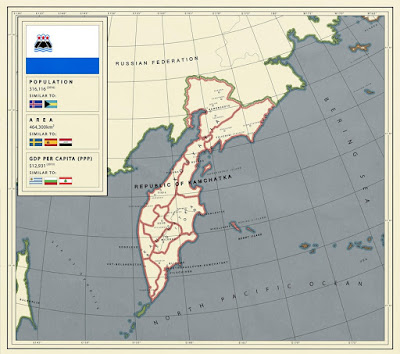 This is "If Kamchatka was an independent country" by Pavelzuk and I found it on Imaginary Maps subreddit. As far as I can tell there isn't much of a story to the map, but we can gleam some details by just looking at it. Since there is a Russian Federation we can probably guess that Kamchatka gained independence around the time the Soviet Union fell apart. Google Fu didn't help me find any independence movements in the region and considering that most of the population is Russian it makes it even more unlikely this place would want to separate from the rodina.

Still I did find one article that suggested America could have bought Kamchatka from Russian when they bought Alaska. Perhaps if that happened, Kamchatka may have had very different demographic history that would make it more willing to be independent rather than being a part of the United States or Russia.

Regardless of whether the scenario makes sense, the map is well done. Soft colors and a minimalist style makes it a treat to look at. I wasn't the only one who thought so either. Brilliant Maps did a piece on the map as well and included some factoids about this fictional country. Go check it out when you get the chance.

Honorable mentions this week go out to "1983: Doomsday - Rise of the North - North America" by Lynn Davis, "Jewish Crimea" by Iserlohn, "Central African Republic" by SRegan and "The Independent State of California" by Rubberduck3y6.