Today's flag is one I liked, hence why I shared it on social media earlier this week. It turned out you guys liked it as well if the analytics Facebook and Twitter provided me are correct. Yet when I realized that I would probably have to write a post on this flag, I was stumped about what to write about. So there is going to be less alternate history and more traditional history in today's Flag Friday. 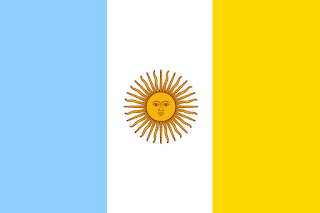 Above is the "Tri-Color Flag of Argentina" by CelticSky17, which features a tri-color design based on the French flag, the blue and sun from our timeline's flag of Argentina and the yellow from the flag of Spain. Simple, but effective way of showing an alternate history. But what exactly could the point of divergence be?

I'm not going to lie, I don't know much about the history of Argentina. To be fair, not many alternate historians do either, hence why you don't see many alternate histories featuring it or another nation in South America. Nevertheless, that is not an excuse to learn and I can say at the very least that I did learn something while writing today's post.

For example, did you know that French Argentines make up 17% of the total population of Argentina? Or that France's invasion of Spain during the Napoleonic Wars indirectly caused the Argentine War of Independence? Of course, relations between Argentina and France have not always been good. Twice France blockaded Buenos Aries to naval commerce (in 1838 and again in 1845).

Perhaps if France intervened more directly in the Argentine Civil Wars, one of the victorious factions may have adopted such a tri-color design as the one CelticSky17 made as a show of gratitude. Then again I am not knowledgeable enough to make such a guess, but if you know something of Argentinian history, please share your scenario for how such a flag could come about in the comments.