I've been thinking the other day of doing a Trope Talk on "Sequoyah", which is what I'm calling the scenarios involving a Native America-majority state located in our timeline's Oklahoma. That is probably why The Oklahoman Tricolor by Ramones1986 caught my eye: 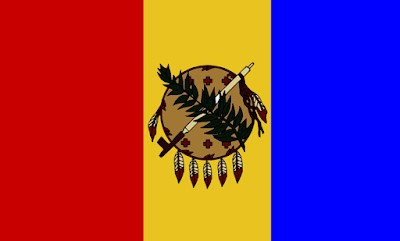 The flag itself is just okay. Looking at it closely it seems that the red bar is slightly larger than the yellow or blue bars and I don't know if that is intentional. The shield is good and looks similar to what is currently on Oklahoma's flag, plus it was done by Marc Pasquin, who has been doing artwork for some of my recent videos like Plausibility Review: 11/22/63 by Stephen King (hey, there is another shout out to my YouTube channel). It more then makes up for the oddly positioned bars.

Still what I like about this image is the speculation it produces in my mind. To be fair the flag is for an Oklahoma, not a Sequoyah, but a part of me could see this flag being used for a Native American-majority state either in a world where America has balkanized or as a state in the Confederate States of America. Maybe I will talk more about this later.

Honorable mention this week goes out to the Flag of Atenist Egypt by Sam McDonald. You may also want to read more about New Zealand's vote to select a new flag.