Map Monday: The European Continent in 1960 AD by DPKdebator

I like how Map Monday can sometimes shine light on new or little known alternate cartographers. For example, lets look at DPKdebator's "The European Continent in 1960 AD": 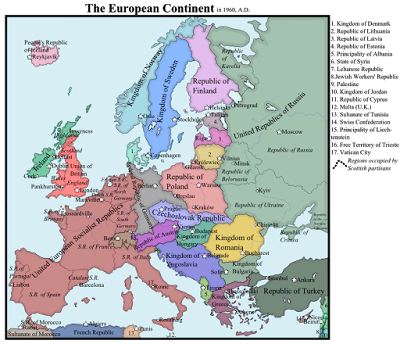 The scenario is pretty straightforward: what if the Cold War was reversed? Thus you have Russia and Eastern Europe as capitalist democracies, while Western Europe and the United States (not seen here) are communist states. Its an Inkscape map and its very well-done, probably because DPKdebator used Rebecca "Upvoteanthology" Stirling's tutorial on Inkscape mapmaking.

It also reminds me of Back in the USSA by Eugene Byrne & Kim Newman, which followed a similar concept (although Britain was still capitalist in that universe). I also like how Ireland takes the place of Greece in our timeline, which was the only Balkan nation in our history that was on our side of the Iron Curtain. I think it was a missed opportunity, however, to not have Corsica as the last remnant of the French Republic instead of Algeria. It would have been an amusing parallel to the China/Taiwan situation. Even with that criticism, it is still a good looking map.

Honorable mention this week goes out to "The Sun Sets on the Eastern Front" by Zalezsky. You should also check out Atlas of Cursed Places: A Travel Guide to Dangerous and Frightful Destinations by Olivier Le Carrer, which is a book I was introduced to last week by Vintage News.