Wait a sec! Didn't I say I was going to wait until we reached the first milestone in Patreon to bring back Flag Friday? Well the truth is that maybe I was a little premature in created a Patreon page. No going back now, but I am going to be changing a few things there and here in an effort to improve The Update experience for everyone.

More importantly, I really want to talk about flags, so let's begin with the Flag of Modern Carthage by BR0SElDON: 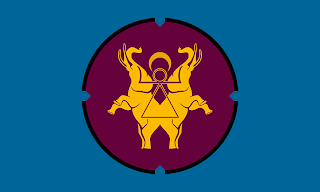 This was posted on the Vexillology subreddit a couple weeks ago and its design and story potential immediately caught my eye. There isn't really a back story with the flag, but its creator did have this to say about it: "Blue for the Mediterranean sea, purple representing Carthage itself. The elephants and Tanit symbol are general Carthaginian imagery, while the broken circle around them is for their harbor."

Now I know even less about flag designs then I know about map making, but I did like imagining a world where this flag existed. Was it a timeline where Carthage was victorious over Rome in the Punic Wars and became the center of culture in the Mediterranean and Europe? Or did they just survive and became a constant rival and threat to the Latin city-state? The flag suggests that maritime activities are still important, so did they participate in any Age of Exploration? Meanwhile, Tanit is a Punic and Phoenician goddess, so does that mean this Carthage is still pagan?

So much fun speculation produced by just one flag. Hopefully we will have even more opportunities to imagine new alternate histories in future Flag Fridays.