I still can't believe I actually managed to write 200 Weekly Updates. I would like to write more, but I think my video says it all:
Of course if for whatever reason you don't want to watch the video, let me just say thanks to everyone who has been reading Alternate History Weekly Update. I wasn't sure where this blog was going to take me, but I am happy it has given me the opportunity to talk with so many intelligent, worldly and thoughtful people like yourselves.

Since I am celebrating a major milestone in my writing career, I think this is the perfect opportunity to announce that I have joined Patreon. For those who don't know, Patreon is a crowd-funding service that allows creators to obtain funds from patrons on a recurring basis. I am using a by month system and hopefully this will help me raise funds for my many alternate history projects and to produce more and higher quality content for you.

Now I know some of you out there think I am just begging for cash and you would be wrong. What is great about Patreon is that you can pay as much or as little as you want a month, but certain levels will unlock perks that will open up exclusive content, opportunities to pick topics for me to write about or alternate history works for me to review. Plus, once certain goals are met I will also release new content, such as the return of Flag Friday, a Confederate victory themed batch of articles and videos, new video series like "History by Hollywood" and more.

So what will I do with the money raise? Well this won't go towards my personal income. Instead it will go toward making my alternate history projects self-sufficient. I will use it to pay for me to go to conventions to promote alternate history, buy better equipment to make videos, pay for contributors to The Update and publish anthologies of web original alternate history books.

So please take a look at my Patreon profile and please consider becoming one my patrons. It would mean a great deal to me and I promise you won't be disappointed.

Headline: All 13 Episodes of The Man in the High Castle Premieres on Amazon on Nov. 20. 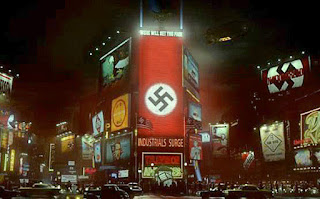 The title says it all, but just to reiterate, all 13 episodes of Amazon's adaptation of The Man in the High Castle will premiere on Nov 20th. This news was announced during the Television Critics Association’s press tour last Monday. The panel also talked about a lot of different aspects of the show and creator Frank Spotnitz said one of the themes of the show is what it means to be an American and how opposing the bad guys isn't always enough.

If I have one final piece of commentary to say on this news is that, holy crap, they are really pushing Rufus Sewell's role in this series. Don't get me wrong, he is a fine actor, although he tends to be type cast as the villain. I am also pretty sure he is playing the villain in this show as well. I really hope the Nazi isn't the most interesting character in this series. If he has an complex character arc, sure I could enjoy that, but I want our heroes to get some screen time as well.

I guess we will all know more in November, but if you are looking for more "Nazis Invade America" stories, check out Slate's article on what if Germany invaded the United States in WWII.

Book of the Week: United States of Japan by Peter Tieryas Liu

I am doing things a tad differently around here again. I am going to be using Weekly Update to honor not just the best videos of the week before, but also the best books, alternate historian(s), photos and more. Lets begin with the book of the week, which goes out to Peter Tieryas Liu's United States of Japan. 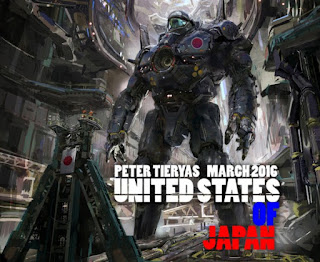 Since this book doesn't come out until March 2016, there really isn't a lot of info about it. To be honest when I first saw the picture I was thinking more Pacific Rim than alternate history, but it turns out this really is from a different timeline than our own. Peter went into some details about his world on SF Signal, where he shared his favorite Japanese mecha, and had this to say:


Giant robots, a mecha corps, and AI-driven simulations that draw on contemporary gaming; United States of Japan is a spiritual sequel to The Man in the High Castle that imagines what the late 80s would be like if Japan had conquered America.

The massive mechas serve two purposes; destroy rebellious Americans, and deter the Nazis from invading and seizing the USJ, particularly as they have their eyes on the Texas oil fields. While many of the robots are completely AI driven, many are controlled by human pilots as they’ve often been able to make mincemeat of the purely robotic fighters. And as I took inspiration from Japan, they’re called mechas rather than the Western-styled mechs.

So plausibility has been thrown out the window, but it still sounds like a creative story to me. I hope I get a chance to read it when it comes out. 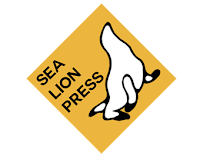 The featured alternate historians for the week are Meadow from AlternateHistory.com and everyone involved with Sea Lion Press. For those who don't know Sea Lion Press is a small press Meadow has established to publish some of the best work on AlternateHistory.com. I was really excited when I learned about this project since I have longed held that some of the alternate history you find online is just as good if not superior to what you find in bookstores or Amazon.

Here are the list of current works published under the Sea Lion Press banner:

They currently have a website and a Twitter account, so you can follow them there to get news, but I will also keep you updated on anything I learn. I will end this segment by wishing the Sea Lion Press guys the best of luck.

Photo of the Week: "Rocketeer" by Alexey Mordovets 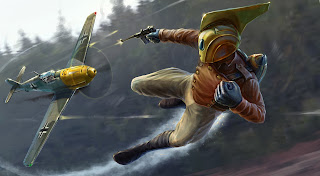 This was one of my favorite films as a kid and I think Alexey captured the hero quite well here. I imagine that in this painting he is fighting over Europe, while going on secret missions for the Allies. It is a ton of action packed in a still picture. I really liked it.

Honorable mention this week goes out to these color photos of the inside of the Hindenburg.

Video of the week this week goes out to Epic Rap Battles of History's Jim Henson vs Stan Lee:
This was the finale of season 4 and it was...frightening. Seriously, when you see the surprise guest at the end you will understand what I am getting at. It was still a great battle and I look forward to seeing them when they come into Chicago.

Matt Mitrovich is the founder and editor of Alternate History Weekly Update, a blogger on Amazing Stories and a Sidewise Awards for Alternate History judge. When not writing he works as an attorney, enjoys life with his beautiful wife Alana and prepares for the day when travel between parallel universes becomes a reality. You can follow him on Facebook, Twitter and YouTube.
Posted by Mitro at 10:53 AM