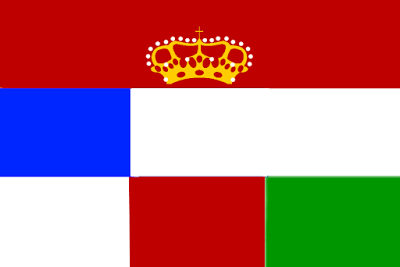 With Italy joining the Central Powers during the Great War the Allies sued for peace and Germany found itself dominating the continent. Serbia was officially annexed into the Austro-Hungarian Empire in 1920.

Emperor Charles I & IV was looking for ways to keep his empire together. By 1932 the Dual Monarchy became the Triple Monarchy as Slavs were given more power as the Hungarians were. This was done both to placate the Slavic peoples of the empire and to take some power away from the Hungarians.

The updated flag added the colors of Serbia. Austria was moved to the center and only its crow appeared on the flag.

The flag stayed in use until 1964 when the empire collapsed and was broken into separate Austrian, Hungarian, and Yugoslav states.