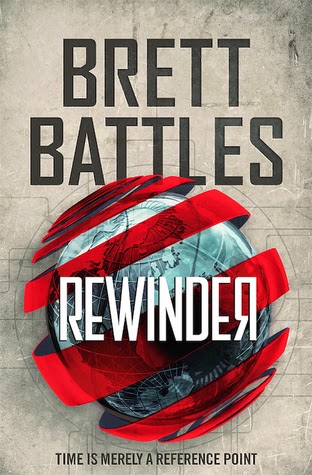 Occasionally you will find yourself one of the lone voices of negativity in a sea of praise. This is how I felt after I listened to the audio version of Rewinder by Brett Battles. Trust me, I wanted to enjoy the book, but in the end I had to be honest with myself and the readers like you.

Rewinder tells the story of Denny Younger, a young man born near the bottom rung of society in a world where the British Empire rules North America (with only the slight hiccup of the American Incident of 1775 to interrupt this rule) and most of the world. This Empire is rather more corrupt and oppressive than in our timeline (if there are citizens of the Commonwealth currently drafting angry comments, remember I didn't write the book). The British class structure, for example, is a de jure institution with people being born into and labelled according to their socio-economic status. Denny himself is an "8" (1s, 2s and 3s are considered the upper class) and destined to follow his father into his career at the power plant, but Denny is desperate to avoid this future. Good grades in school and excellent test scores earn him an invitation to join the Upjohn Institute and become a "rewinder". This institution verifies the personal histories of the Empire's nobility, but it does so using time travel. This is done through hand held devices called "chasers" that can take any rewinder anywhere in space and time.

As Denny trains at the Upjohn Institute and receives glowing praise from his teachers, he discovers that the Institute sometimes uncovers dark family secrets of the rich and powerful and uses these to blackmail and manipulate them. Although Denny doesn't always approve of the Institute's decisions, he nevertheless finds his new life an improvement over his old life back home. That is until he inadvertently changes the past. When he returns to the present he discovers the world he once known is gone. The Empire is no more. In fact Denny's hometown of "New Cardiff" is called in this alternate present "Los Angeles" and it is part of the "United States of America". Not knowing it, Denny created our own timeline.

I really wanted to like Rewinder. Vikas Adam did a great job narrating and the book itself had a lot of similarities with the excellent and influential Bring the Jubilee by Ward Moore. In both stories the protagonists come from poor backgrounds in an alternate timeline (in the case of Bring the Jubilee, a world where the South won the American Civil War). They find solace in the study of history and are invited to join a peculiar institute which gives them the ability to travel through time. In both stories the protagonist accidentally changes the past, but that is where the similarities end. Where the protagonist in Bring the Jubilee finds himself trapped in the new timeline (which is also our timeline), Denny finds that he has the opportunity to change things back to normal...but questions whether he should. On top of a budding romance he has with a young woman named Iffy, he also finds himself approving of this new history over his own history.

To be honest I am not sure why Denny agonized so long over the decision. To Battles credit he did give several examples to show the reader that our timeline wasn't perfect, but even the most jaded observer of current events would still pick our timeline over Denny's. I think Battles missed out on a golden opportunity to give Denny a real choice by making two timelines that had real pros and cons to both of them. Even the upper class antagonist who tries to stop Denny and, without trying to spoil the ending, arguably had even less reason then Denny for wanting the original timeline restored and yet opposed him because of...I don't know, spite? Seriously their motivation is even less clear than why Denny hesitated over what to do about the divergence he caused. Besides just not liking Denny for some reason, the best idea I could up with is that the upper classes of that alternate British Empire are just conditioned to never allow the lower classes to experience any moments of joy or pleasure (POLITICAL HUMOR ALERT: Just like those congressional Republicans, am I right? Huh? Huh? Okay I will never do that again.)

Besides those issues above, we have to admit that this is a time travel story so the usual plot holes apply. For example, Denny ends up wiping out his history, but he still exists and as does anyone else who may have been travelling in the past before the break occurs. Admittedly, this does not bother me that much. There seems to be an unspoken rule in many time travel stories that time travelers are immune from changes to history (i.e. Back to the Future). No, what bothered me the most was the actual method of time travel. As mentioned before, Denny travels through time with a device that can also teleport him to any location on the planet, even without travelling through time, a la Doctor Who.

This wasn't an issue at first until at one point in the story when Iffy, after learning that Denny is a time traveler who is planning to reset the timeline, tries to convince him to pick her world over his (again why this was such a difficult decision, I have no idea). In a clumsy argument by Battles, Iffy brags that her timeline had people landing on the Moon in the 1960s, while Denny has to embarrassingly admit his timeline had yet to accomplish such a feat and he felt like he needed to defend his timeline better. After listening to that scene I wanted to shout: "Hey Denny! You already have the ultimate trump card in your pocket. Its a freaking time machine! Has Iffy's timeline invented that? No, they haven't!"

Of course, it took me a while to fully realize the size of plot hole I was dealing with. Remember Denny's chaser is not just a time machine, it is also a teleporter. So...why doesn't the Upjohn Institute just teleport someone in a spacesuit to the surface of the Moon? Or Mars? Or hell, a world outside of the solar system? Why doesn't Denny's Britain rule a vast an interstellar empire? Its never really explained why they are stuck on Earth when they can literally move anywhere through space and time. In fact the Upjohn Institute's entire business strategy is pretty short-sighted when one comes to think about it. What happens after they verify the history of every powerful family in their highly stratified country? Its not like there are new noble families being made on a daily basis who can throw money at Upjohn in such a dystopia. The chaser isn't just a time machine, its also a TARDIS! Why blackmail rich people, when you can conquer the stars?

So we have poor character motivations and also a ridiculously advanced technology that is not used to its full potential. And yet...that isn't the worst issue with Rewinder. No, the one issue that really bugged me the most was Denny. I really get annoyed when an author just tells us how awesome a character is, but never shows it. A great example is Bella from the Twilight series, where every character is obsessed with her and yet she has little to no personality or impact on the story. Okay, perhaps it is unfair to compare Rewinder to Twilight. Maybe Denny is more like Neo from The Matrix, who we are told is an amazing computer hacker and yet needs to have AI and EMP spelled out for him (seriously, go watch those movies again or the Nostalgia Critic review and you will see that Neo is kind of an idiot).

We are told Denny really knows his history and yet we are shown him struggling to remember important historical events from his timeline. We are told he is incredibly bright and yet we are shown him struggling to comprehend the corruption of his world. We are told he has the making of a great rewinder and will be finishing his training long before his fellow trainees, but we are shown him erasing his entire history by his own clumsiness. I mean Denny is either a golden boy or clod, and I know what the author wanted us to think, but he certainly didn't prove that with the story. I think part of the problem stems from the fact that Denny is the audience stand in, but he is also the main character. I don't think the story would have been hurt that much if Battles tuned down the compliments people were showering Denny with.

In fact when you consider how easy it was for Denny to change the timeline, its amazing to think the Upjohn Institute didn't have some procedure in place to counter this. I mean Denny was still technically a trainee when he made his mistake, but his only instruction about changing the past was just not to do it. I mean are we supposed to believe no one has screwed up and...you know what, no. I'm done reviewing this. I have said enough bad things about this book. Let us conclude this review and later ponder why I always have more to say about a book I didn't like vs. a book I enjoyed.

In the end I really wanted to like Battles' Rewinder. It started off on a high note at the beginning, but my interest plummeted from then on. I kept listening, hoping that the story would go in another direction, but I was left disappointed. And yet, as I mentioned before, my poor review is in the minority for this book. People really seemed to like Rewinder, but I am not sure if I listened to same thing they did. So with that all being said, I can't recommend this book, but that's just my opinion. Maybe I am the crazy one here and you will end up enjoying Rewinder...but I seriously doubt it.