For a Few Souls More by Guy Adams

The thrilling conclusion to the Heaven's Gate Trilogy!

The uprising in Heaven is at an end and Paradise has fallen, becoming the forty-third state of America. Now angels and demons must learn to get along with humans.

The rest of the world is in uproar. How can America claim the afterlife as it’s own? It’s certainly going to try as the President sets out for the town of Wormwood for talks with its governor, the man they call Lucifer.

Hell has problems of its own. There’s a new evangelist walking its roads, trying to bring the penitent to paradise, and a new power is rising. Can anyone stand up to the Godkiller?

Hunter of Sherwood: The Red Hand by Toby Venables

Guy of Gisburne, knight and agent to Prince John, is all that stands between England and anarchy, fighting a shadow battle to protect the kingdom from those who would destroy it.

Returning to England after foiling a plot to destroy Jerusalem, Guy of Gisburne is arrested and hauled to the Tower of London; John, England's regent in the absence of its monstrous King, needs his knight once more. A killer has broken into the Prince’s most secure castle in the north and left a message, drawn on the skin of one of his victims: 'the circle is closing,' signed with a handprint in blood. Is the threat genuine? Who or what is the Red Hand? Someone is killing John's men, and the obvious culprit – the most dangerous man in the Kingdom, Hood himself – has an alibi even Guy can't deny.

The Spitfire pilot monkey Ack-Ack Macaque faces a world on the brink in this adventure, the conclusion to his astonishing, award-winning trilogy.

In the thrilling conclusion of the Macaque Trilogy, the dangerous but charismatic Ack-Ack Macaque finds himself leading a dimension-hopping army of angry monkeys, facing an invading horde of implacable killer androids, and confronting the one challenge for which he was never prepared: impending fatherhood! Meanwhile, former journalist Victoria Valois fights to save the electronic ghost of her dead husband and reclaim his stolen soul from the sands of Mars.

The Corridors of Time by Poul Anderson 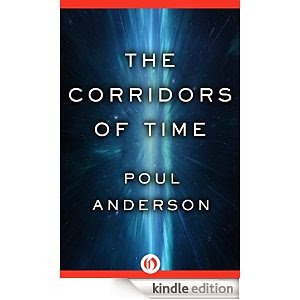 College student, ex-marine, and martial artist Malcolm Lockridge is in prison awaiting his trial for murder when he receives an unexpected visit from an extraordinarily beautiful woman named Storm. Claiming to be a representative of the Wardens, a political faction from two thousand years in the future, Storm offers the astonished young man a proposition: freedom in return for his assistance in recovering an unspecified lost treasure. But it is not long before Malcolm realizes that, in truth, he’s been recruited as a soldier in the Wardens’ ongoing war against their rivals, the Rangers. And this war is different from any that has ever been fought, because the battlefield is not a place but time itself.

Traveling backward and forward through corridors connecting historical epochs separated by thousands of years, Malcolm is soon embroiled in a furious conflict between the forces of good and minions of evil. But the deeper he is pulled into this devastating time war, the clearer Malcolm’s ultimate role in humankind’s destiny becomes, causing the troubled young soldier from the twentieth century to question whether he’s been chosen to fight on the side of good or evil . . . and if such a distinction even exists.

A Midsummer Tempest by Poul Anderson

A fantastic tale of intrigue, love, war, magic, and swashbuckling adventure set in an alternate universe where fairies mingle freely with Englishmen and all of Shakespeare’s fictional characters are real

Welcome to an alternate civil-war-torn seventeenth-century England—a world where Hamlet once brooded and Othello jealously raged. Here faeries and sprites gambol in English woods, railroads race across the landscape while manned balloons float above the countryside, and the most respected historian of all is one William Shakespeare of Stratford-upon-Avon.

The year is 1644, and the war between the Roundheads and the Cavaliers rages. When Rupert, nephew of King Charles I, is taken captive by Cromwell’s troops and imprisoned in a Puritan home, he is immediately smitten with the beautiful Jennifer Alayne, his captor’s niece. Escaping with the help of his newfound beloved and the loyal trooper Will Fairweather, Rupert leads Jennifer deep into the forest, where the faerie folk who dwell there have a vested interest in the outcome of the great and bloody conflict. Though the lovers must soon part—with the prince undertaking a dangerous mission for his magical benefactors that could turn the tide of war—Rupert and his lady love will be forever joined by the rings presented to them by King Oberon and Queen Titania. And despite the strange, twisting pathways and turbulent seas they are destined to encounter, they will always be able to find each other again . . . as long as their love remains true.

Nominated for the World Fantasy Award and winner of the Mythopoeic Award, Poul Anderson’s A Midsummer Tempest is a titanic achievement—a delightful alternate-history fantasy that brings the fictional worlds of Shakespeare’s plays to breathtaking life with style, wit, and unparalleled imagination.