The Bloodline Feud: A Merchant Princes Omnibus by Charles Stross

The six families of the Clan rule the kingdom of Gruinmarkt from behind the scenes. They are a mixture of nobility and criminal conspirators whose power to walk between their world and ours makes them rich in both.

Miriam, a hip tech journalist from Boston, discovers her alternate-world relatives with explosive results that shake three worlds. Now, as the prodigal Countess Helge Thorold-Hjorth, she finds herself ensnared in schemes and plots centuries in the making. She is surrounded by unlikely allies, lethal contraband, and—most dangerous of all—her family.

To avoid a slippery slope down to an unmarked grave, Miriam must build a power base of her own—with unexpected consequences for three different time lines, including the quasi-Victorian one exploited by the hidden family. 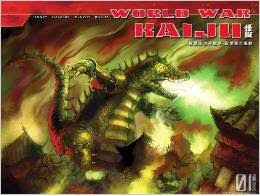 What if Doctor Strangelove created Godzilla? World War Kaiju is the story of an alternate history, one in which the atom bomb was never created and the ultimate weapon of mass destruction is the kaiju fifty foot tall radioactive beasts spawned from the mysterious KAI-235 isotope. Follow the journey of one journalist as he teams up with a retired CIA operative to uncover the truth about the conspiracy behind the monsters... ...who are the architects of the inevitable Kaiju War? ...what is the shocking secret behind the mysterious KAI-235 isotope? ...where did Cuba manage to hide a crab monster the size of an aircraft carrier? ...why are rogue monsters appearing all over the world? ...how long can Tricky Dick keep these truths from the people?

From a Foreign Shore: Stories of History and Alternate History by Andrew Knighton 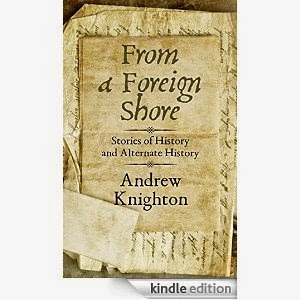 What if someone had conquered the Vikings, someone claiming to be their gods?

What if you were ordered to execute a statue, and hanging just didn't seem to work?

These short stories explore different aspects of history, some of them grounded in reality, some alternative takes on the past as we know it. Stories of daring and defiance; of love and of loss; of noble lords and exasperated peasants.

Holy Water – a pair of medieval peasants struggle with faith and futility as they try to execute a statue.

Farewell to a Foreign Shore – a Viking sets sail from the raiding lands.

Odin’s Mirror – Vikings face the image of the divine in an alternative Dark Ages.

From the Sea – a messenger is plagued by visions on his run from Marathon.

Sir Cai, the Shining Knight – an Arthurian warrior proves to be more than he appears.

Matt Mitrovich is the founder and editor of Alternate History Weekly Update and a blogger on Amazing Stories. Check out his short fiction. When not writing he works as an attorney, enjoys life with his beautiful wife Alana and prepares for the inevitable zombie apocalypse. You can follow him on Facebook or Twitter.
Posted by Mitro at 12:00 PM