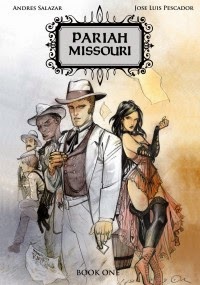 It is quite serendipitous that I decided to read and review Pariah, Missouri by Andres Salazar when I did. I just started reading Truman by David McCullough and his family settled in the part of Missouri that Pariah is set and the first chapter talks about the trials and tribulations of living in wild Missouri. The author actually did a good job capturing frontier Missouri life, although Salazar did over-exaggerate certain parts for the sake of the story. That can be forgiven, however, considering the story he was trying to tell.

Pariah is historical fantasy comic with a good heaping of weird fiction. Its the year 1857 in the boom town of Pariah, Missouri. Several people, including the Marshall and many children, have disappeared and a recently arrived puppet show is suspected. A card shark with a secret identity, a prostitute trying to help her family, a voodoo practitioner on the run from the law and a backwoods bounty hunter have to team up to save the down from the supernatural forces that inflict it.

I enjoyed reading Pariah. It was a quick read (I finished it during my lunch break), but it kept me entertained with its wild west heroics. I have seen it described as "A-Team set in a supernatural western", although to be honest it put me in mind of Guardians of the Galaxy by the way the characters interacted with each other. Character development was a bit spotty. At one point a character uses a hitherto unmentioned supernatural ability to defeat the bad guys just when it was needed the most. Perhaps I missed the set up, but nevertheless it came as a big surprise.

The artwork was good, although as I have mentioned before I don't have an eye for such things. The use of watercolors was unique and worked for the story. This is only, however, book one. Salazar has set up the town of Pariah for more mischief, especially from another group who don't have the town's best interest at heart. No spoilers, but I can safely recommend this book for those tired of usual superhero affair and want to try a dark fantasy set in one of the rougher periods of American history.