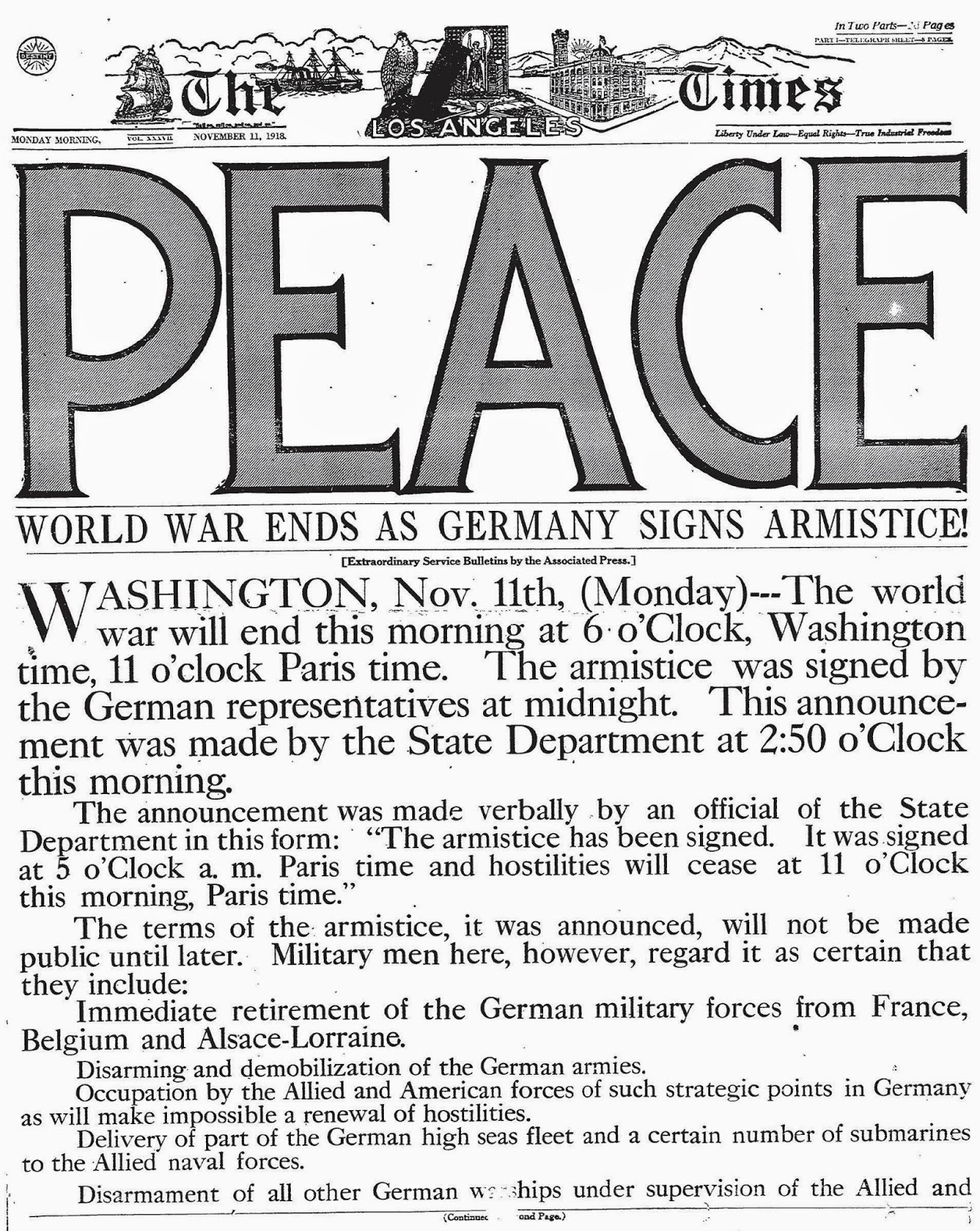 A few weeks ago I discussed what could happen if the Central Powers (and more particularly Germany) won World War I outright. Now I will discuss the alternate histories where the Entente wins the Great War..

Wait a second? Didn't the Entente/Allies/etc. win World War I in this history? How is this alternate history? Well you are correct, the Entente did win World War I (although it has been pointed out to me that Germany still won the war on the Eastern Front), but that doesn't mean the speculation stops there. Fans and professionals like to create timelines through big, overall changes to history. Someone who lost will win and someone who died will live (and vice versa). That style of thinking, however, can really limit your creativity.

Consider Glen's "Dominion of Southern America" timeline on AlternateHistory.com. In his timeline the Americans win their independence from the British, just as they did in this timeline. The hook, however, is that Canada sided with the rebels, but the Carolinas and Georgia did not, and remained a British colony. Thus you keep the big event it shares with our timeline, but still have the freedom to craft an alternate history that is unique and divergent from our own history.

Also there is an argument to be made that the Entente's victory in our timeline was near inevitable, as Chris Nuttall pointed out in his article "The Almost Certain Victory: A Strategic Analysis of World War One". Without some unforeseen change before the war begins or during the early years, the Germans and their allies will likely lose the war anyway. This is important to consider when crafting any World War I alternate history.

So with that in mind, lets take a look at the first scenario in this category: an outright Entente victory. In our history fighting ended between the Allies and Germany on November 11, 1918, when the Armistice of Compiègne was signed. It is interesting to note that this wasn't a surrender by the Germans (in fact the Germans still had troops on French and Belgian territory when it was signed), but a peace designed to satisfy the war weary German people who had revolted and overthrew the Kaiser.

But what if the Germans had been defeated outright and forced to surrender? Such an outcome seems impossible given what we know of the war, but some authors have tried to devise such a world, such as Bernard Newman's The Cavalry Went Through! which suggests that a change to British tactics and training could have meant an early defeat of Germany without having to wait for the German people to tire of the war.

What would be the outcome of such a world? Fritz Leiber suggested in his short story "Catch that Zeppelin!" (recently republished in The Mammoth Book of Alternate Histories) that the defeat would create a more humane and scientifically advanced Germany that missed out on Hitler and the Nazis...and yes, like any utopia, they have airships as well. While it is true the harsh terms of the Treaty of Versailles didn't help matters for Germany, there many other factors at play that could have still led to some extreme ideologue coming to power in post-war Germany.

Is there another scenario that might ensure a lasting peace in Europe after an Entente victory? Well another popular scenario in alternate history is for the United States to join the League of Nations. In our history the United States refused to ratify the agreement that would see them join the League, despite President Wilson's best efforts which may have led to incapacity at the end of his term. But what if Wilson was successful and convinced America to back the League? Perhaps he heeded the advice of other foreign leaders, as "It Might Have Been" by James Beck proposed. Could it have led to a more advanced and peaceful world as found in the "Gernsback" setting of GURPS Alternate Earths?

Much like Leiber vision of Germany, I find such an idea to be overly optimistic. Although a lasting in peace Europe might be out of reach, does the Middle East have a chance? In our history, the British and French reneged on their agreement with the Arabs to allow them self-government if they rebelled against the Ottomans and instead divided the region up into several League of Nations mandates. These mandates did not take into account the ethnic and religious differences in the area and some believe it to be a direct cause of the sectarian strife that still envelops the region to this day.

Could this outcome have been avoided? To prevent European colonialism, the Arabs would have needed to defeat the Ottomans with little or no assistance from the British or French. James Fiscus suggested as much in his short story "Jihad" and I suggested a similar solution in my guest post on This Day in Alternate History. I admit my scenario is just as optimistic as the stories I mentioned previously, but I was only making the point that if the Middle East could have avoided European imperialism at the end of World War I, the world might have been a better place.

And that really is the common denominator for all three of the scenarios mentioned above. Authors who tweak the Entente victory are usually searching for an even better world than the one we have now, because let's face it, liberal (and I don't mean "leftist") democracies are preferable to militant autocracies. Speaking of militant autocracies, I almost forgot about the most popular Entente victory scenario of them all: Russia does not fall to communism. That, however, is a story for another day...