Still having trouble reaching my goal of five articles a week. My job has been extremely busy this week as my firm has just brought on some highly successful real estate attorneys and clearing them through conflicts has been a nightmare. What I really need is a contributing blogger. Someone who can submit articles on a regular basis to help fill in the gaps. But how do I encourage someone to volunteer for such a role?

Well...I actually have a small budget to pay for a staff writer. I am thinking either a flat rate per article or a few cents per word deal. Nothing in concrete yet, but if you are interested, shoot me an email at ahwupdate at gmail dot com. Since I am creating a position out of thin air here, I am willing to consider any and all proposals as long as they meet the subject matter of the blog.

Friend of The Update, Michael J. Martinez, was in the news a lot last week. Although his next book The Enceladus Crisis (sequel to The Daedalus Incident) does not come out until May, already review copies are being sent to the usual SF sites. For those who don't know about The Enceladus Crisis, here is the description from Amazon:


Two dimensions collided on the rust-red deserts of Mars—and are destined to become entangled once more in this sequel to the critically acclaimed The Daedalus Incident.

Paul Weimer of SF Signal said in his early review of the novel that it "manages to improve on the first in significant ways but doesn't quite leap to the next quantum level." Still he did give it 4 out 5 stars, so I will take that as a recommendation. Those wishing to learn more about Michael can check out his interview over at the Functional Nerds and, for those aspiring authors out there, check out his original query letter to Michael's agent to find out what a successful query letter looks like.

Alan Moore has a new entry in his successful League of Extraordinary Gentlemen series. Titled Nemo: Heart of Ice, here is the description from SF Signal:


Moore revisits the world he created in The League of Extraordinary Gentleman in a new book, Nemo: Heart of Ice, which focuses on Janni Dakkar, daughter of Captain Nemo, and her trek across Antarctica to prove herself by recreating Nemo’s own Antarctic expedition. Moore draws from several sources, including H.P. Lovercraft, to create a dark and mysterious continent full of dangers and madness. As a character, Janni feels the weight of the Nemo name and legacy set squarely on her shoulders, and struggles throughout the book to come to terms with that.

Patrick Hester (of SF Signal Podcast fame) reviewed the comic for Kirkus and said "[f]ans of Moore's League will enjoy the book as an addition to the bigger universe, but for me, it fell a little flat. I wanted something more." So a disappointing review for someone like me who has read several books from the series, but I am still likely to read this one. What do you think?

Jonathan Oliver, commissioning editor of Solaris Books, has commissioned The Wolf in the Attic, a new historical fantasy novel by Paul Kearney. The novel is set in early 1930′s Oxford and features well-known fantasy authors JRR Tolkien and CS Lewis as characters. It is told from the point of view of a lonely, Greek refugee girl who one day discovers a Romany boy in her attic. The boy is a shape-shifter, and becomes her friend. The two begin to explore the world around Oxford, discovering things they never imagined existed. The girl, Anna, is obsessed by the Odyssey, and likens the Romany boy, Luca, to Odysseus. Here are the author’s thoughts:

“This story has been rattling around in my head for a long time. The genesis of it was a visit to Turkey some years ago, when I saw the magnificent ruins at Ephesus. I knew the ancient history of Asia Minor quite well, but its more recent reincarnation as Turkey was pretty much a mystery to me, so I started reading into it. The one event that really stuck in my mind during my research was the sack of Smyrna in 1922, a ghastly, shameful catastrophe that the world has completely forgotten about. The more I read about the forced exodus of the Ionian Greeks, the more I felt I wanted to say something about them. But how? I put the idea to one side.

“Then, several years later I went back to Oxford for the first time in almost two decades. The place I had known as a teenager was both similar and jarringly different to the memories I had been holding on to, and I had the oddest sense of being dislocated, ghost-like, remembering places and things that no longer existed. That powerful, stubborn mental grasp of a place that was no longer there in some respects made me think about the tenacity of memory, and the way it can mislead and deceive.

“Finally, back at home, I was simply walking the dogs along the beach, and the character of Anna  came to me in a rush. All those dislocated and disparate factors seemed suddenly to mesh, and I had the heart of a story unlike any other I’ve ever tried to tell.”

The novel will be published in autumn 2015. The agent was John Jarrold, and the deal was for UK/US rights.

Only two maps caught my eye last week. The first is from one of my favorite timelines on AH.com, "A Crack at Draka" by Municipal Engine. That timeline's Great War has just concluded and here is what the world looks like in 1914: 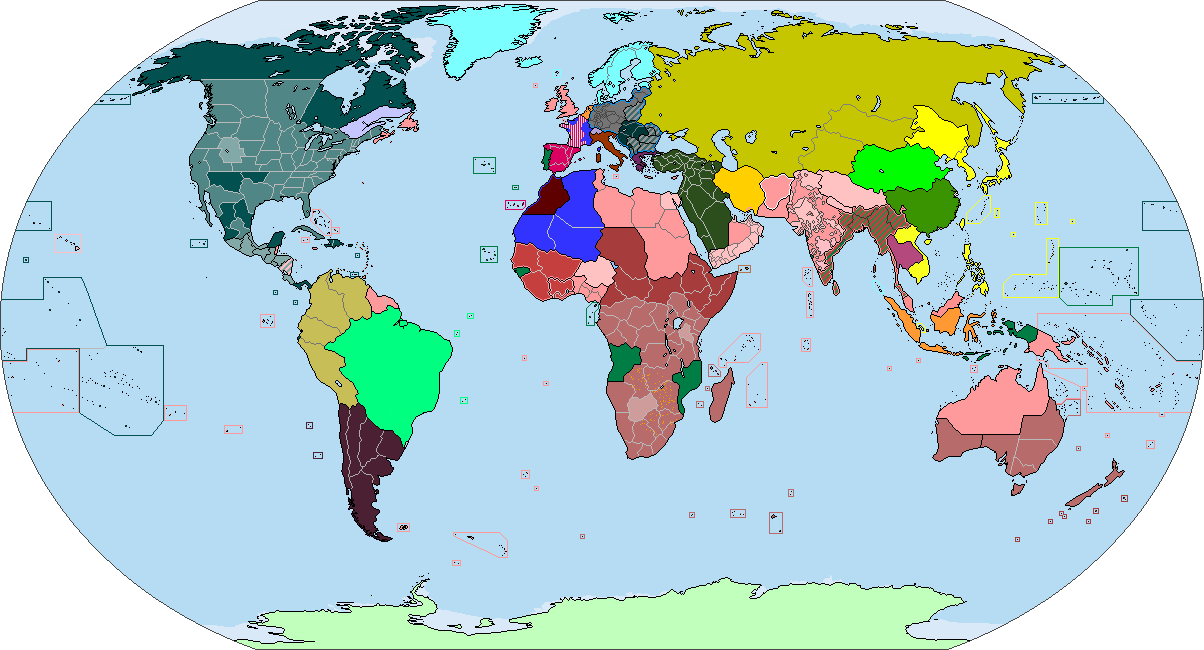 Finally we have a non-AH map, but one I found highly amusing. It is a fan map by "theantilove" featuring the location where every animated Disney movie was set: 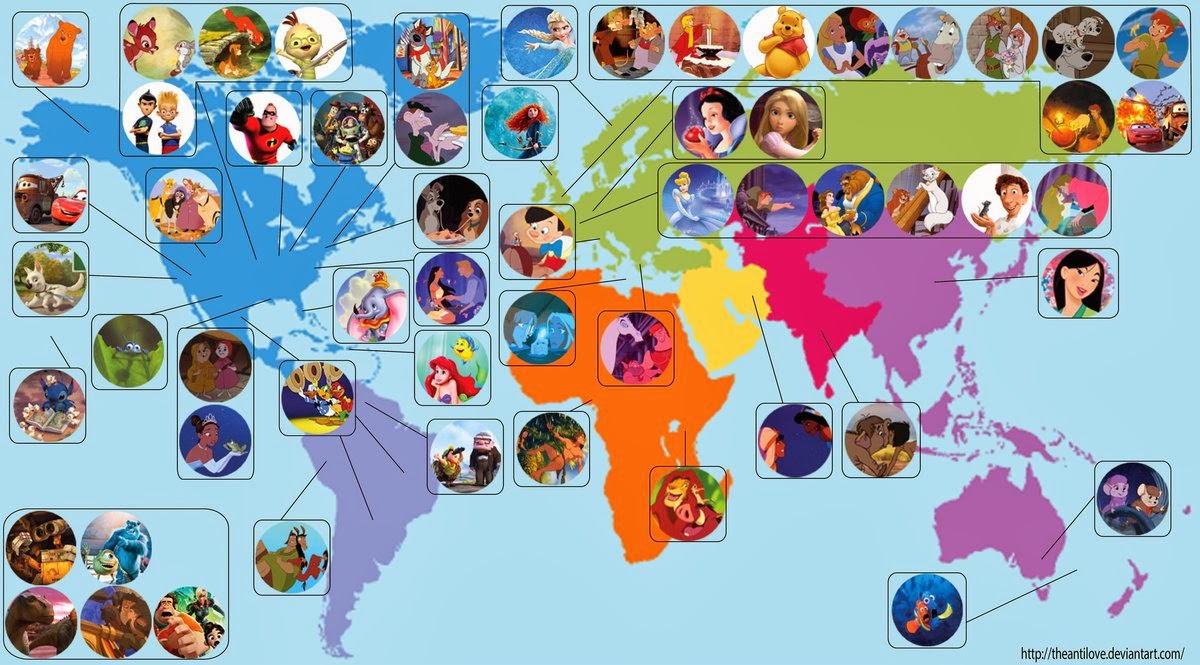 Which map did you think was the best? Let us know in the comments below.

Got some good videos this week. First up, a curious gem I found through Unleash the Fanboy called Project Arbiter which has been described as a "diselpunk Captain America":
Next up is the weirdest "-punk" I have ever featured on The Update. Watch Adam and Joel from Rooster Teeth infiltrate Jazzpunk:
And now our gallery closes for the week with another episode from my new favorite alternate history channel, the Alternate History Hub, simply titled "What if the United States Lost the Revolution":
Know of any other videos alternate historians will enjoy? Let us know in the comments below. 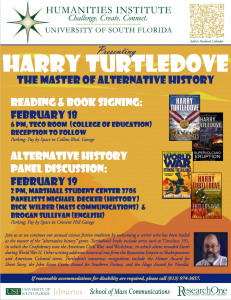 February 18-19: Harry Turtledove visits the University of South Florida for a reading, book signing and an  interdisciplinary discussion of alternate history.

The Michael Moorcock Collection: An Inside View by John Davey at Gateway.
Read the first 4 chapters. Obsidian Eyes by @AWExley #steampunk at The Masquerade Crew.
Which Gideon Smith Character Are You? by David Barnett at Postcards from the Hinterland.

Alternate Great Lakes by Sean Sherman at Other Times.
Democrats, Media Slam President Romney Over Health Care Law Changes by Charles C. W. Cooke at National Review Online.
Game of Thrones looks like a sideshow next to these real historic events at New.com.au.
Hitler's Secret Science by Alex Michael Bonnici at Far Future Horizons.
The Road Not Taken: It may seem like Alex Rodriguez was destined to be a baseball villain, but he very nearly wasn’t by Rany Jazayerli at Grantland.

What if the Nazis Had Destroyed Paris? Volker Schlöndorff's New Film, "Diplomacy" by Gavriel D. Rosenfeld at The Counterfactual History Review.

Hearts of Iron IV has learned from CKII and EUIV by Mike Holmes at Gamereactor.

History's Most Famous People Re-Imagined as Weapons by Richard Eisenbeis at Kotaku.
What if “Doctor Who” Was an American Show? at Geeks are Sexy.