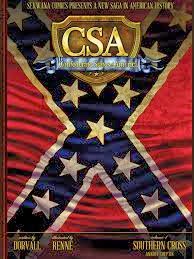 American Civil War alternate histories are a dime a dozen. It has become hard to bring something new and fresh to the concept, but I think the good folks at Sekwana Comics have made a good start with their graphic novel Southern Cross: Annuit Coepti, volume one in the CSA Confederate States of America series. Written by Dorvall and illustrated by Philip Renne, the series will showcase the post-war world where the South won the Civil War, without the aid of alien space bats. But does Volume 1 hold up?

At the Battle of Gettysburg, General Robert E. Lee takes Longstreet's advice for the third day of battle turning Gettysburg into the ultimate Confederate victory. Washington is captured, Lincoln is overthrown in a coup led by McClellan, large swatches of Union territory is ceded to the Confederacy and free blacks who fought for the North are marched south to be sold into slavery. We see this from the point of view of various historical figures and four fictional characters who are implied to have larger roles as the series progresses.

I don't want to give to much of the plot away since the book is only 64 pages long. I was impressed by their ambitious plan to tell a pure alternate history in comic form, which is something you don't see often since most alternate history comics either involve superheroes or steampunk. There is a suggestion that someone is influencing events, but I am holding out hope that is not time travelers or other such ASB hand-waving. The illustrations by Renne were really good and captured the stark reality of war in mid 19th century. I also liked how the Confederacy was protrayed as being disorganized during the war, which is something even more traditional histories fail to grasp.

All that being I had a lot of issues with the scenario in general. Victory at the Battle of Gettysburg has become cliche and even some historians suggest that a Confederate victory would not have won the war for them. The Union would still have its defenses around Washington, their armies in the west and central Confederacy and their navy blockading southern ports. In Southern Cross, the Confederate victory completely destroys the Union's will to fight and they meekly surrender everything to the South. Considering the South only wanted independence, conquering the North just doesn't sound plausible. Even McClellan's coup is implausible and it is more believable that his bid to run for President in 1864 would have been successful with a loss at Gettysburg, followed by a negotiated peace where the South gains their independence with little loss to Union territories.

I did like the multi-dimensional characters and Nathan Bedford Forrest looks to be morphing into the series main antagonist. I found the female abolitionist to be a straw man (or would it be straw woman?) when it came to discussions about slavery and the reasons the Union was fighting. I also thought Dorvall confused Lincoln's pragmatism toward slavery as he strove to get elected as having no strong opinion toward abolition. You have to look at this entire life for a better picture of his views on the subject.

Despite my issues with the overall scenario and some of the characters, I found Southern Cross to be a good start for this pure alternate history comic series. There are so few of this type out there that it would be shame if this remains the only one of its kind.