Preview: The War of the Grail by Geoffrey Wilson 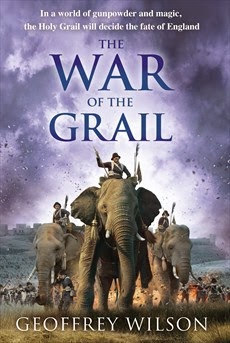 I have a new book to add to my to read list: The War of the Grail by Geoffrey Wilson. The third book in the Land of Hope and Glory series. Set in a world of steam and magic where Europe was conquered by the Moors and later the Indians, here is the description from Amazon:


In Land of Hope and Glory Geoffrey Wilson imagined a world in which an Indian empire rules Europe through the power of magic. In The Place of Dead Kings, Jack Casey—an old soldier who never meant to be a hero—became England's only hope. Now it is 1856, King John is dead, and the war that Jack has dreaded since the start of the English rebellion has finally begun. Regiments of Rajthanan troops are massing to the south of free Shropshire, while to the north refugees bring stories of attacks by the devil himself. Both friends and enemies fear that unless Jack can find the elusive Holy Grail, there is no hope. . . A strange set of maps that Jack discovered in Scotland could hold the key to England's freedom. Kanvar, the rebels' enigmatic Sikh ally, believes the charts will unlock the secrets of the Rajthanans' magic and perhaps guide Jack to the Grail itself. But can Jack harness the power of the Grail before the conqueror's overwhelming forces destroy the dream of a free England forever?

I have already read and reviewed the first two books in the series, Land of Hope and Glory and The Place of Dead Kings, so you can check those out. I also interviewed Geoff a while back in case you want to learn more about the author. In the meantime, stay tuned for my review.

Email ThisBlogThis!Share to TwitterShare to FacebookShare to Pinterest
Labels: Geoffrey Wilson, Land of Hope and Glory, magic, Preview, Steampunk, The War of the Grail