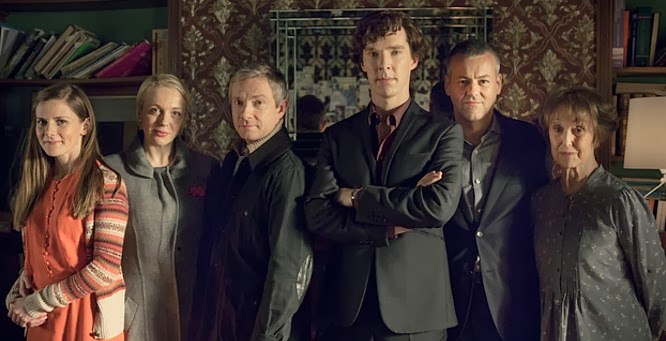 I never really started enjoying the Sherlock Holmes universe until I watched BBC's Sherlock. Although I read a couple of the short stories myself, it wasn't until I saw the modern day retelling that I finally began to seek out more Sherlock to consume. I read Doyle's entire body of work on Sherlock and sought out old movies featuring the detective (Peter Cushing is currently my favorite actor to portray him).

So why am I reviewing the most recent episode to premier in America here? Sherlock might not exactly be alternate history, but it features several tropes that make it appealing to alternate historians. The character of Sherlock Holmes lends itself to alternate fictional histories and steampunk stories like Anno Dracula and League of Extraordinary Gentlemen, while the modern retelling of the famous detective implies a very different career for Sir Arthur Conan Doyle at the very least. Even fans of the genre have been drawn to him, even when others speculate on whether he is really a him.

The show itself is amazing and really highlights Steven Moffatt's skill as a writer. The gritty realism combined with the efficient use of modern technology in the show and the film like quality of the episodes (each series has three episodes usually an hour and a half long) makes for gripping television. So as you can probably guess I was eagerly awaiting the premier of Series 3.

Titled "The Empty Hearse", the show begins with Sherlock returning home to Britain after spending the last two years dismantling Moriarty's criminal network. Although we saw Sherlock fall to his death at the end of Series 2, we also inexplicably saw him watching John Watson mourn at Sherlock's supposed grave. We quickly learn that Sherlock faked his death to protect Watson and his friends from reprisals, but now his brother, Mycroft, needs him back to uncover a terrorist threat to London.

Sherlock, however, first seeks out Watson who has moved on with his life and is on the verge of proposing to his girlfriend, Mary, when Sherlock surprises both. Now in the original stories Watson faints upon discovering Sherlock is still alive, but in this modern retelling he reacts more naturally by physical assaulting his resurrected friend...multiple times. With tensions still high between the two former friends, Sherlock works to uncover who is behind the terrorist threat and how to stop them before it is too late.  Meanwhile, Watson struggles to come to grips with his friend's return and whether or not he wants him back in his life.

To begin, it was great to see the characters again. Benedict Cumberbatch and Martin Freeman are still excellent playing their versions of the crime fighting duo (no...not the one with the tights) and the camaraderie between the two is very believable. I also liked how the writers trolled the fans by featuring multiple theories on how Sherlock survived his fall, without actually telling them what really happened. This doesn't bother me because in the long run it is not important how Sherlock lived, but why he chose to "die". We all have to make sacrifices for the ones we love and it is important in Sherlock's character arc to see that there are people who he would give up years of his life to save.

All that being said, overall I did not enjoy this episode. The pacing was surprisingly fast compared to older episodes. Cinematography was chaotic with multiple jumps to other scenes and unnecessary slow motion. Even the plot wasn't very and seemed to borrow (or stole) from V for Vendetta. Spoiler alert: turns out the terrorists were going to blow up Parliament using a train covered in explosives on Guy Fawkes Day. Really?!?! That is the best you can do? Out of all of the books, short stories, comics, games, etc., created around Sherlock Holmes you go with an already used idea that has nothing to do with the character? Not exactly the best way to reintroduce a character we have not seen in two years.

Frankly, I was disappointed by the series premier, especially when you factor in the long wait. My wife, who also became a fan of the series through me, found it so boring she fell asleep midway through! I can only hope the remaining episodes in the season make up for such a weak premier.