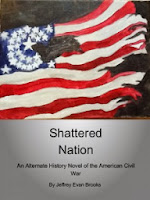 Excepting perhaps only the Second World War, no event history has generated as much counterfactual speculation as the American Civil War. As we are now moving through the sesquicentennial of the conflict, with battlefields overrun by tourists and reenactors, it's no surprise that alternate historians are yet again focusing on the struggle that tore America apart one hundred and fifty years ago.

Some of the more common points of divergence have been the springboard for successful alternate historical writing. Harry Turtledove created perhaps the most profitable AH series ever written out of the question of what might have happened had Robert E. Lee's Special Order 191 had not been lost during the Maryland Campaign of 1862. More recently, R. E. Thomas has written an interesting and entertaining novel imagining what might have been had Stonewall Jackson not died of the wounds he received at the Battle of Chancellorsville. Many books have focused on how history might have been different had the Confederates won the Battle of Gettysburg or Britain entered the war as a result of the Trent Affair.

My novel - Shattered Nation: An Alternate History Novel of the American Civil War - tackles another popular Civil War point of divergence in imagining a scenario in which Jefferson Davis does not replace Joe Johnston as the commander of the Army of Tennessee during the Atlanta Campaign of 1864.

The considerable majority of Civil War alternate history writing focuses on points of divergence during the first half of the war (i.e. up to the summer of 1863). Conventional wisdom maintains that the South had no chance whatsoever to win the war once they had been defeated at Gettysburg and Vicksburg, if indeed they ever had a chance to win the war at all. I disagree, maintaining that the South's chances for victory were as good, if not better, in 1864 than they had been in 1863. Once the possibility of foreign intervention had been ended by the Emancipation Proclamation, the South had only one way to achieve victory: wear down the North's will to continue the war and persuade them to quit. That, in turn, could only happen in the Northern people kicked the Lincoln administration out and voted in an administration that would make peace. 1864, unlike 1863, was an election year.

In retrospect, we can see that the Confederate armies were melting away from attrition, which would lead to a Southern military collapse in 1865. Yet it must be stressed that this was far from obvious at the time. In 1864, the Army of Northern Virginia was holding the Army of the Potomac at bay and inflicting enormous casualties upon it. Fiascoes like Cold Harbor and the Crater were exposing incompetence in the Northern armies. Jubal Early drove Union forces out of the Shenandoah Valley, came close to capturing Washington itself, and sent a major Union city up in flames. Union attempts to gain control of Florida and Louisiana had ended in disaster and Nathan Bedford Forrest remained undefeated in Mississippi. Morale on the Northern home front was plummeting and, in August, Lincoln himself stated that he was likely to be defeated by the Democratic nominee, George McClellan, in the upcoming election.

It was the capture of Atlanta by William Tecumseh Sherman in early September that turned the tide of the war and, more importantly, the tide of public opinion. That victory, in turn, was made possible because Davis replaced Johnston with the more aggressive John Bell Hood, who proceeded to fight and lose three major battles against Sherman in little more than a week. The South lost more than ten thousand men at a moment when it needed every man it could get. After a month of siege and maneuver, Hood was chased out Atlanta. Lincoln had the military victory he needed to rally public opinion back to his side and coast to a comfortable electoral victory two months later.

Could Johnston have succeeded where Hood had failed? This question has been controversial since the moment Johnston was relieved and it sparked a bitter postwar feud between rival partisans of the two generals, which was as much a dispute between Johnston and Davis and between Johnston and Hood. Some maintain that Johnston, a much more cautious and meticulous commander than Hood, would have avoided the heavy losses Hood sustained and thereby held Atlanta beyond the November election. Others assert that Johnston was too reluctant to fight and would have abandoned Atlanta rather than see his army put at risk.

Some have maintained that, even had the Confederates held Atlanta and had McClellan won the 1864 election, it would not have mattered. After all, McClellan was a War Democrat who repudiated the "peace plank" of the Democratic National Platform immediately after becoming the nominee. But it's worth pointing out that McClellan pledged to continue the war only after he received the news that Atlanta had fallen; had Sherman been defeated and had Atlanta remained in Confederate hands, he might have sung a different tune. Moreover, as the historian Albert Castel points out, the political pressure from the Copperheads to implement a ceasefire with the South would be hard for McClellan to resist and it would have been more or less impossible to resume the war when negotiations had failed (and they would have failed). Even worse for the North, Republicans not not feel that the war was worth fighting under a McClellan administration, since the emancipation of slavery would probably have been dropped as a Union war aim.

Could Johnston have defeated Sherman and held Atlanta? Could a Democratic victory in the 1864 election have lead to Confederate independence? Those are the questions my novel seeks to explore and I hope it represents a worthwhile contribution to alternate history literature.

Jeffrey Evan Brooks graduated from Texas State University with a double B.A. in history and political science and an M.A. in history. He currently lives in Manor, TX, just outside Austin. In addition to writing, he teaches life skills to students with special needs at Anderson High School in Austin. His website is www.jeffreyevanbrooks.com and he can be reached at jeff at jeffreyevanbrooks dot com.
Posted by Mitro at 11:00 AM