I now present my interview with Jordan Harbour, host of the Twilight Histories podcast:

According to your website you have a strong interest in archaeology. Where did that come from?

It was a childhood passion. I loved reading when I was young, mostly because of the imaginary worlds it would stimulate. When I discovered history, I found worlds far vaster, more colorful and certainly more complex than those from the books I was reading. The best part was, they were real!

I heard an archaeologist describe how he viewed the world. He said when he looked at ruins, he didn't see old stones toppled over. He saw city streets full of people, sights smells--he saw a living world. That’s what I wanted. That was the job for me. So I became an archaeologist. I went on digs in the Middle East, Europe and finally in Canada.

What is a usual day like for an archaeologist on a dig and is it anything like Indiana Jones? Sorry I had to ask.

It is profound to imagine an object you are holding was last touched many thousands of years ago. When you hold that object, in that place, you can sometimes feel you’re looking around the landscape with their eyes. For a precious moment, their world is yours. It is those precious few moments of clarity that make archaeology special.

That said, most of an archaeologist’s day is less exciting. It involves digging up topsoil, filling buckets, scraping, brushing and shoveling.  Sometimes it involves hiking through the woods or along highways, stopping every now and again to dig test pits--often in the rain. It’s a tough job with long hours and little pay, and it keeps you away from home a fair amount.

I think the dominant and persistent desire of any archaeologist (whether they admit or not), is a desire to time travel. An archaeologist tries with every faculty to understand the past--to see it. Time travel would make that task easy. If a time machine is ever invented, the first person who should try it out is a commando  The second is an archaeologist.

What inspired you to produce Twilight Histories? 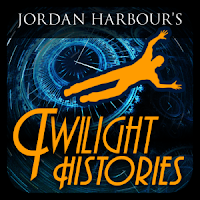 When I left archaeology, I had a hole to fill. In podcasting, I saw an opportunity to fill that hole. I wanted to create something that would allow listeners to experience history as archaeologists do. But to create the show was a very long process. It took two years of writing scripts and recording them, only to scrap them and start over.

There were two podcasts that helped me come up with Twilight Histories. The first was Dan Carlin’s Hardcore History. His shows are intense. They sometimes leave me emotionally exhausted. That’s the tone I wanted. The second was Rob Cain’s Ancient Rome Refocused. He did an episode called ‘Time Travel is Easy, History is Hard.’ In this episode, Rob does something very unique and narrates in the second person. YOU are the time traveler visiting Rome. With Rob Cain, I had my format. Rob has also been a sort of mentor to me as I build the show

This I also thought about long and hard. I really wanted the show to have something of the ‘creep’ factor I had seen in old Twilight Zone shows from the 60s. As a naming convention, I also wanted to tie in with Hardcore History. Unfortunately, I made the same mistake in my title as Dan did. If you do a search for ‘hardcore’, you get nothing good. Likewise, if you do a search for ‘twilight’...

What do you use to record and edit your podcast?

I use the Rode Podcaster microphone. It’s solid metal, heavy and very satisfying to use. Many podcasters start out with the Blue, but I often encourage new podcasters to invest just a little more and get the Rode. It’s a serious mic and makes you feel like a serious podcaster when you use it.

As for recording software, I unfortunately use Garage Band. I don’t like Garage Band. The problem is, if you change the volume levels (for instance, if you want to fade in a sound), they don’t stick to your recording. So if you move your recording around, your volume changes don’t move with it. That’s really annoying!  It would be fine if you only have a couple tracks, but Twilight Histories requires many, many tracks. I’d love to get something more pro, like Adobe Audition.

Twilight Histories started off as a time travel themed podcast, but recent episodes involve alternate history. Why the change?

I got to the point where I’d spent two years creating podcasts that I wasn't happy with. When I came up with the concept for Twilight Histories, I decided I’d go for  it, even though the idea wasn't fully formed. As I’m writing this, I’m still playing around and refining the show.

I've always liked the idea of alternate history, and I feel throwing myself into this genre will open up a lot of creativity. There are endless possibilities, and that’s very exciting.

What kind of new worlds are in store for the Twilight Histories audience?

The one I’m dreaming up right now involves the Chinese making contact with the Aztec in the 15th century. All that gold and silver makes the Aztec an incredibly attractive trading partner, especially when the Chinese realize they can trade iron tools and weaponry pound for pound for precious metals. By the time the Europeans sail to the New World, the Aztec are a powerhouse.

There are many other ideas I have floating around. I want to do a show about a brilliant Hindu philosopher who visits Athens and starts a school, influencing the future of Western thought. Another show concept involves a Roman colony being founded in the New World--long after the empire collapses, this colony remains. Yet another involves a second (and much deadlier) civil war taking place in America during WWI.

Even with earlier contact with the Old World, Aztecs and other Native Americans will still have to deal with Old World diseases. Won't that hurt their chances of becoming a regional power?

Disease is inevitable when dealing with any form of contact with the Old World, whether it’s Europe or China. But civilization collapse is not inevitable. After the Black Death, Europe rebounded dramatically and those who survived were much better off because of it. Real Estate was cheap, labor rates were good, wills were plentiful... life was good. You could even make the argument that the Renaissance was a direct product of the Black Death.

The time travel consultant you voice in the intro to some episodes is very unsympathetic.  Is that just the character or do most people who work in the industry become pessimistic on the chances of a traveler's survival?

Time travel has only recently opened up to tourism. Wealthy patrons sign up for what they think will be an exciting trip, like going to a living museum.

In reality, time travel is immensely dangerous. Even the best trained Navy Seals and Special Ops experience heavy casualties. They die of plagues and battle wounds, they’re burned at the stake for witchcraft, forced to fight in the arena, and sometimes they’re even sacrificed at the altar.

The time travel consultant sounds jaded. He’s jaded because he knows most of the bright eyed tourists will never return. Those that do are changed. They come back confused, scared, half-starved, sick  or with missing limbs. Their eyes are darkened.

I’d encourage you not to feel offended by the time travel consultant’s tone. He’s certainly bitter, but maybe now you can imagine why. He doesn't want another death or ruined life on his conscience.

I'd also encourage you not to back down. You paid your deposit. You moved up the waiting list. Now it's time to step back in time... if you dare.
Posted by Mitro at 11:00 AM