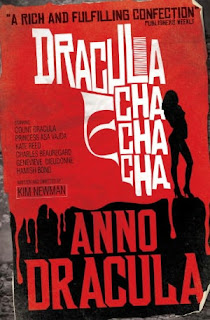 When I discovered a package containing Dracula Cha Cha Cha (originally titled Judgment of Tears) by Kim Newman my first thought was "I need to get some red wine." Weird, I know, but I always drank red wine while reading the first two books in the Anno Dracula series. It put me in the mood to really enjoy this horror/comedy/alternate history epic. Too bad they don't let you drink at work.

For those who don't know, the Anno Dracula series can be described as an "alternate fictional history". The heroes of Bram Stoker's Dracula fail to defeat the title character of the horror masterpiece. Dracula goes on to marry Queen Victoria, allowing vampires to come out of the shadows and walk openly among their prey. Those expecting some horrible vampire apocalypse as seen in I Am Legend by Richard Matheson will be disappointed (sorry Will Smith). Humans learn to adapt to the nocturnal monsters and discover that despite their powers, vampires can be killed. Vampires, meanwhile, discover that medieval notions of justice and superiority can get them killed in a world where they no longer have the defense of being dismissed as a myth.

Dracula Cha Cha Cha is the third book in the series. Failing to hold onto to throne of Britain or conquering Europe through Germany during WWI, Dracula got a reprieve from exile to help the allies defeat the Nazis in World War II. For his help he was given a palace just outside of Rome where he holds court as "King of the Cats". In 1959, the world's notable vampires and warm celebrities gather in Rome for the wedding of Count Dracula to Princess Asa Vadja. The pending union has worried the global intelligence community who fear Dracula will use the influence gained from marrying such a notable elder to try again for world domination.

Reporter Kate Reed, heroine from The Bloody Red Baron, has traveled to Rome to cover the wedding an ends up a witness to a brutal murder of two vampire elders. A vigilante known as the "Crimson Executioner" is killing vampire elders in Rome, but is he the true mastermind of the slayings or is someone else pulling the strings? Someone more powerful? Kate's investigation is hampered by the dying Charles Beauregard, former agent of the Diogenes Club and Kate's unrequited love. He is being tended by the eternally young elder vampire Geneviève Dieudonné who is concerned that the British agent Hamish Bond is putting undue stress on Charles who refuses to turn vampire to save his life. He may not have a choice if his former fiance and current head of the Dracula household, Penelope Churchward, has a say. She has become a powerful vampire in her own right and through the King of Vampires wields untold influence over the vampire community.

Kate deals with love, loss and murder as we meet a cast of historical and fictional characters, including a football player from Kansas named Kent and the Vatican's best exorcist. Her trail will take her to the true ruler of the Eternal City, a being who does not wish to share power with the elder vampires. Despite Newman's vampires being natural beings within his universe, he leaves it open for a little magic in the world. Its not the magic of wand wavers and quasi-Latin spells, but a darker and far older magic that even elder vampires fail to understand (What's that? Something is rising out of the Pacific? I'm sure its nothing.)

Dracula Cha Cha Cha has more in common with Anno Dracula then series The Bloody Red Baron. Vampires are being killed and the unsolved murders are throwing politics in disarray as vampires and humans compete for power. Though I am still a big fan of military AH, I have to admit that it is refreshing to read something besides battles and special forces missions. People will enjoy this supernatural mystery, although plausibility hounds will be frustrated by the lack of meaningful change to the timeline despite the existence of vampires. If you pick up a copy of the Titan Books reprint you will also get to enjoy a copy of the new short story "Aquarius", set in 1968 in Britain. Review on that one later. In the meantime, go and buy a bottle of red wine and open up the best vampire book for any alternate historian.

Matt Mitrovich is a long-time fan of alternate history, founder and editor of Alternate History Weekly Update and a volunteer editor for Alt Hist magazine. His fiction can be found at Echelon Press, Jake's Monthly and The Masquerade Crew. When not writing he works as an attorney, enjoys life with his beautiful wife Alana and prepares for the inevitable zombie apocalypse. You can follow him on Facebook or Twitter (@MattMitrovich).
Posted by Mitro at 11:00 AM