Grab your goggles and fire up that boiler. Time for the steampunk edition of Weekly Update.

So I am sure we have all heard about the literary team-up between author Kevin J. Anderson and Neil Peart of Rush. Anderson's new novel Clockwork Angels is based off Rush's new album with the same name, inspired by the story and lyrics of the album and expanding it into a full-length story. Here is the description from Amazon:

A remarkable collaboration that is unprecedented in its scope and realization, this exquisitely wrought novel represents an artistic project between the bestselling science fiction author Kevin J. Anderson and the multiplatinum rock band Rush. The newest album by Rush, Clockwork Angels, sets forth a story in Neil Peart’s lyrics that has been expanded by him and Anderson into this epic novel. In a young man’s quest to follow his dreams, he is caught between the grandiose forces of order and chaos. He travels across a lavish and colorful world of steampunk and alchemy with lost cities, pirates, anarchists, exotic carnivals, and a rigid Watchmaker who imposes precision on every aspect of daily life. The mind-bending story is complemented with rich paintings by the five-time Juno Award winner for Best Album Design, Hugh Syme.

Wait, there's more! Anderson actually wrote a guest post on John Scalzi's blog describing the novel and it turns out he is a bigger Rush fan then I realized. You can learn even more about the novel during an interview Anderson did over at io9 where he discusses his love of Rush, collaborations, steampunk and dystopias. 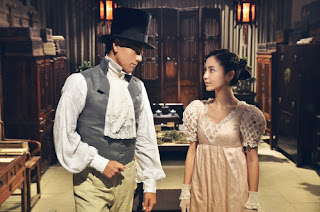 The first reviews of the steampunk, martial arts film Tai Chi Zero (check out the full trailer here) are in and they are not good. Film Business Asia said Tai Chi Zero "is poorly directed, weakly written and iffily cast, and tries way too hard to be different and cheeky, overloading the viewer with visual information while ignoring basic elements like structure, storyline and character development." Ouch. The Hollywood Reporter was only marginally better when they said "[h]ardcore teenage fantasy fans and video-gamers may find director Stephen Fung’s brand of irreverent comedy irresistible, but viewers past the youngest demographics will tune out to the threadbare comic book-style story and childish characters, though not without a few amazed laughs at the inventive audacity of the project."

O well. Interesting concept, but I guess it fails in execution.

It's sad times in the Empire. The Queen is locked up - for her own good or her Prime Minister's is impossible to say - and the Church of the Holy Cog prophesies ruin as it prays for the salvation of the Empire. However there are options; the Colonies offer riches and fame, for those bold enough to emigrate.

The game will feature many tropes from the genre including street urchins, aristocrats, zeppelins and mad scientists. Unlike our own imperial age "here, there be dragons" should be taken literarly and you never know what those pesky scientists are doing behind closed doors (is that chanting I hear?).

It has been a while since I played a city-sim like this, but I might have to pick up a copy when it comes out.

Today until Sept 23: See a steampunk version of "Wizard of Oz" in Glendale, AZ.

Sept 15-16: Steampunk Weekend of the Old West Festival in Ohio.

Egyptian Influences in Victoriana and Steampunk by Maeve Alpin at Steamed!

The Literary Steampunk: A Market Defined by Karina Cooper at Steamed!

Mars Rover Curiosity is a Steampunk Creation by Ian O'Neill at Astro Engine.

What's steampunk? by Julia Eccleshare at The Guardian.

'Dark Unwinding' and the promise of secret passages by Diane Petryk Bloom at Examiner.com.

Non-Fiction review: The Art of Steampunk by Art Donovan done by Leanne Tough at Steampunk Magazine.

Review: 'The Iron Wyrm Affair' by Lilith Saintcrow done by Jessie Potts at Happy Ever After.

Review of Vampire Empire 3: The Kingmakers by Clay and Susan Griffith done by Falcata Times.

Watch the Origins of Dishonored's Dark Steampunk World in this New Trailer by Dave Thier at Forbes.

The Men That Will Not Be Blamed For Nothing release new single today by Jack at Alt Sounds.

Matt Mitrovich is the founder and editor of Alternate History Weekly Update, a volunteer editor for Alt Hist and a contributor to Just Below the Law. His fiction can be found at Echelon Press, Jake's Monthly and his own writing blog. When not writing he works as an attorney and enjoys life with his beautiful wife Alana.
Posted by Mitro at 3:00 PM