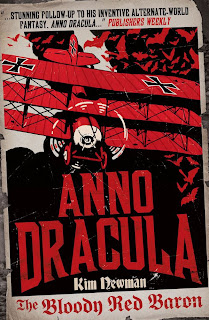 Creatures from our darkest nightmares are unleashed on the closest thing to hell on Earth from human history.  Monsters own the skies and tanks can be brought down by a single, blood-thirsty soldier.  Women surrender their silver for the war effort and creatures lurk in No Man's Land that you could not imagine.  This is World War I envisioned by horror and alternate history author Kim Newman.  This is Anno Dracula: The Bloody Red Baron.

Some backstory for those not familiar with the Anno Dracula series.  The Bloody Red Baron is the sequel to the first book in the series, Anno Dracula.  The series is ann alternate history, except the point of divergence comes from literary history and not real history.  In the first book, the heroes in Dracula fail to defeat the world's most famous vampire.  The Count goes on to marry Queen Victoria, becoming Price Consort of the British Empire.  The upper crust of British society willingly become vampires, while older vampires step out into the moonlight (because sunlight is bad for them you know) feeling comfortable that no one is going to stab them in the heart with a stake.  Dracula's reign, however, is far from peaceful and a revolution sends him into exile.

Now Dracula is back and he has the combined armies of the Central Powers under his command.  In this alternate World War I, vampires fight on both sides and their unique ability to see at night means the war is fought 24/7.  Silver is hoarded by both sides as it is one of the few substances lethal to the undead.  I am glad I finished this book before watching episode 189 of Mythbusters which featured silver bullets.  Because silver tends to shrink and deform as it cools after molding, silver bullets may acquire shape irregularities that affect their flight.  This means they are incredibly inaccurate, which makes the idea of a machine gun loaded with a silver bullet every seventh bullet an ineffective weapon against a horde of fanged troopers.

The Bloody Red Baron begins in the winter of 1918 and everyone on the Allied side of the lines is awaiting the dreaded Spring Offensive, the Kaiserschlacht.  A million men have been freed from fighting on the Eastern Front and are being moved for one last push in the West.  An important piece of the offensive is Manfred von Richthofen and his all-vampire Jagdgeschwader 1.  Charles Beauregard, member of the ruling cabal of the Diogenes Club, has sent his protege Edwin Winthrop to find out what the German's plan is for their squadron of undead aces.  Kate Reed, vampire reporter, is also on the tail, but it will be vampire Edgar Poe who will get to meet Germany's secret weapon and witness first-hand the next evolution of vampire-kind.

The Bloody Red Baron is exceptionally well-written, gore-filled, alternate history masterpiece.  There were scenes in the book, such as Isolde's grisly performance in a dilapidated Paris theater, that sent my imagination into some dark places.  Unlike the prissy, sparkled vampires that infect popular culture today, Newman's vampires are bloody and dark.  They do not just prefer human blood, they desperately need it.  Yet despite its horror setting, one can't help but notice the humor in the over-arcing story.  The Bloody Red Baron is amusing as it is horrifying.

Like Back in the USSA, Newman's collaboration with Eugene Byrne, The Bloody Red Baron features a great deal of intertextuality.  Historic events and people are combined with fictional characters  from popular culture.  Part of the fun of the novel is to try and figure out all of the references.  An appendix is provided in this edition, but it is only for characters that Newman feels were too obscure.  After reading a more complete list on the Internet, it made me ashamed about how little-read I am compared to Newman.

Despite being separate timelines, I cannot help comparing The Bloody Red Baron to By the Blood of Heroes by Joseph Nassise.  Both alternate histories are set in World War I, have steampunk elements and feature horror monsters being used as weapons.  Both novels also feature Manfred von Richtofen, the Red Baron, as one of the antagonists.  In By the Blood of Heroes, Richtofen is an egoistical, reanimated monster bent on not just winning the war, but conquering the world.  If this presentation of the Baron seems like a cliche super-villain, that was intentional.  On the other hand, Newman's vampiric Richtofen is much more straightforward.  He is a killer, pure and simple.  There is nothing else but the war, the fight, the kill.  He has no plans for the future, he lives for the hunt.  Personally I think I liked this version of Richtofen better.  He was more frightening as an undead serial-killer then as a power-mad zombie.

I highly recommend reading The Bloody Red Baron and if you get the Titan Books edition you will also get the new novella, Vampire Romance, included in the back.  I will be writing a review of that story next week, so stay tuned.

Matt Mitrovich is the founder and editor of Alternate History Weekly Update, a volunteer editor for Alt Hist and a contributor to Just Below the Law. His fiction can be found at Echelon Press and Jake's Monthly Anthology. When not writing he works as an attorney and enjoys life with his beautiful wife Alana.
Posted by Mitro at 11:00 AM