Preview: "A New Birth of Freedom: The Visitor" by Robert G. Pielke 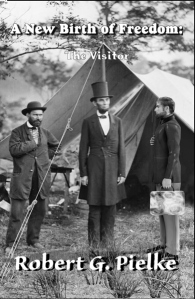 How do you get two warring factions to put aside their differences and unite against a common enemy?  If you are Harry Harrison, you get the British to attack the Confederates after going to war on their side to fight the Union.  If you are Harry Turtledove, you have aliens invade the Earth at the height of World War II.  Take the influences of both authors and you get A New Birth of Freedom: The Visitor by Robert G. Pielke, the first in a planned trilogy, with the last two books to be published by Whiskey Creek Press.  Here is the description from  Amazon:

It has taken centuries to recognize that all humans possess certain unalienable rights. There will come a time when we have to consider whether others deserve those rights as well. That time will come on July 3rd 1863.

When a stranger carrying a shiny, metallic valise steps aboard a train carrying Abraham Lincoln home from a 2 year stint in Congress, everyone stares, wondering about the stranger's odd clothing and strange footwear with the word Nike emblazoned on them.

When the strange man shows up in Lincoln's office at the White House 14 years later, still wearing the same clothes, carrying the same valise and looking not a day older, the president and his staff know something is odd.

But when Edwin Blair opens his valise and projects a 3D image of the Earth on Lincoln's wall, then proceeds to tell a fanciful tale about time traveling aliens preparing to land at Gettysburg on July 3rd, they are sure they've met a lunatic.

Unfortunately for them, they're wrong.


Robert has been kind enough to send me a review copy to read. Though you will have to wait for my review next week, in the meantime you can check out reviews done by other critics.  Lynn McMonigal said that she "LOVED this book" and also liked the "attention to detail. Historical figures such as Abraham Lincoln and Robert E. Lee are described just as history books portray them."  Chew & Digest Books also complimented Pielke on how he portrayed historical figures saying "[w]hen Lincoln talks, it sounds like what I think Lincoln would say. When Robert E. Lee interacts with Blair, it feels real, not like total poppycock." Kirkus Reviews said that A New Birth of Freedom was "[a]n exciting, enticing first entry in a planned series."

One of the cons of the novel that a couple of the reviews agreed about was the presence of the sci-fi elements in the story.  Yet as alternate historians, a little ASB is unlikely to scare us away.  I look forward to reading and reviewing the story, so stay tuned.

Matt Mitrovich is the founder and editor of Alternate History Weekly Update, a volunteer editor for the Alt Hist magazine and a contributor to Just Below the Law. One of his short stories will be published in the upcoming Echelon Press anthology, Once Upon a Clockwork Tale (2013). When not writing he works as an attorney in the state of Illinois and enjoys life with his beautiful wife Alana.
Posted by Mitro at 3:00 PM