The Janus Affair by Pip Ballantine and Tee Morris 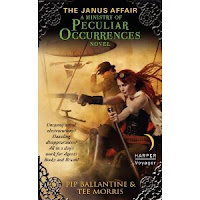 Evildoers beware! Retribution is at hand, thanks to Britain's best-kept secret agents!!

Certainly no strangers to peculiar occurrences, agents Wellington Books and Eliza Braun are nonetheless stunned to observe a fellow passenger aboard Britain's latest hypersteam train suddenly vanish in a dazzling bolt of lightning. They soon discover this is not the only such disappearance . . . with each case going inexplicably unexamined by the Crown.

The fate of England is once again in the hands of an ingenious archivist paired with a beautiful, fearless lady of adventure. And though their foe be fiendishly clever, so then is Mr. Books . . . and Miss Braun still has a number of useful and unusual devices hidden beneath her petticoats.

Icarus and Kay are Steamworkers. To put it simply, they make sure the city they live in has power by taking care of the steam generators. However, there is another: Donna. She appeared out of nowhere, and nobody knows why. So, for the past three years, Icarus and Kay have been spending their free time figuring out who she is.

Then, on the night of their first breakthrough, she disappears. This launches the two of them into a mystery that they must solve, and which they must not tell anybody about, or it could get them killed.

In the first volume of this serialized novel, the boundaries of steampunk have changed in this world where not even the rich have cars, the Holocaust never happened, and a single dictator rules the world.

A dark and disturbing vision of the future causes Confederate General A. P. Hill to change a key event of the American Civil War, resulting in a dramatic alteration of General Robert E. Lee’s 1863 Pennsylvania campaign. With Confederate General Thomas “Stonewall” Jackson still in command following the Battle of Chancellorsville, he leads his Corps to victory at the first Battle of Gettysburg before setting out to gain control of much of central Pennsylvania. Arrayed against him is the Pennsylvania militia of the Department of the Susquehanna commanded by Union General Darius Couch, who is hounded by a frustrated and overbearing President Abraham Lincoln of the United States. General Jackson succeeds in crossing the Susquehanna River at Wrightsville, and then marches north towards the Pennsylvania state capital, setting the stage for the climactic battle of Harrisburg in the small town of Middletown, where the brave but inexperienced Pennsylvania militia confronts the hardened veterans under the great “Stonewall” Jackson.

Duty: A Retelling of Waterloo by Michael Seeley

Wellington is crushed. Napoleon is back. Ireland waits.

A redirected order changes the course of the Waterloo campaign and all of time in this novel of alternate history. Caught in the madness is Captain Aiden Rowe, an Irishman and patriot who fled his homeland after the murder of his parents. Now, with France's enemies retreating, and Napoleon rising again, Rowe will return home.

But he won't be going to Ireland alone. Along with a boon companion, Killian O'Meara, and cutthroat spy James Blackbrook, Rowe will bring the armies of France and the cries of freedom to a fiery island waiting for revolution.

As Napoleon crushes his enemies on the Continent, Ireland starts her own revolt. Through it all, Rowe and O'Meara struggle to keep their humanity in the carnage that arises after Waterloo is won.

DUTY is 85,000 words long and specifically formatted for Kindle with an active table of contents.

The Gilded Cage by Edmund Price

Romania, the former Roman Empire, is a developing nation under one-party rule in a world where where the Japanese language and Asian culture predominates.

Into the autonomous city of Mona steps Mainland policeman Marcus Sabratus. He rescues an expatriate woman from the theft of her money purse and puts both their lives onto a new path. Can he succeed in bringing Monan policing techniques back to the Mainland and can he overcome the cultural and bureaucratic obstacles to be united with his new love?

Set in an alternate universe quite similar to our own, "The Gilded Cage" is a love story set around cross-cultural themes and an examination of what varies and what is truly constant in human affairs. The story of Marcus continues in "Tourists Welcome" and "Rotten to the Core?"

17-year old Kathleen finds herself whisked 60 years in the past to the scene of a famous battle outside her town of Middleford. She also finds love and romance. Now she must choose between life in the past and life in the present.

Alt Hist Issue 4: The Magazine of Historical Fiction and Alternate History contains seven top-quality stories from a variety of genres: horror, alternate history and fantasy, as well as straight historical fiction, including four stories set during World War II. If you’re looking for something other than World War II then we also have two stories from the Nineteenth Century and one from the Middle Ages.

The six stories featured in Alt Hist Issue 4 are:

‘Restless’ by Dylan Fox set in the 1860s onboard a fleet of British ironclad warships steaming towards China.

‘Feast of Faith’ by Shane Rhinewald explores the struggles of common soldiers during the First Crusade who don’t have enough to eat.

‘Three Months of Summer’ by Svetlana Kortchik is a love story that happens during the German occupation of Ukraine in 1942.

‘The Stork’ by George Piper is a backwoods horror that will scare and surprise you.

‘Battalion 202: A Blinded Falcon’ and ‘Battalion 202: Into the Darkness’ by Jonathan Doering are two alternate history stories about the resistance to a German invasion of Britain.

Do you want to see your work given a shout out on our New Releases segment? Contact Mitro at ahwupdate@gmail.com.  We are looking for works of alternate history, counterfactual history, steampunk, historical fantasy, time travel or anything that warps history beyond our understanding.


Mitro is founder and editor of Alternate History Weekly Update. When he is not busy writing about his passion for alternate history, he spends his time working as a licensed attorney in the state of Illinois and works toward being a published author himself one day.
Posted by Mitro at 11:00 AM