Review: "Without Warning" by John Birmingham 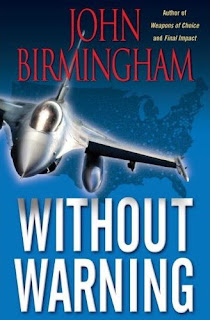 What if the United States went away?

John Birmingham, according to his own statements, was inspired to write Without Warning after hearing students claiming that the world would be a better place without the United States. I do wonder if he was inspired by a timeline from pre-2000 that had as its starting point the complete disappearance of all Americans, but I digress. Without Warning is a strange mixture of military adventure, alternate history and social-political commentary. It is very definitely a fascinating read.

It’s 2003 – and the United States is on the verge of invading Iraq. American and British soldiers are gathering in Kuwait, protest marches are on the streets and people…are just getting on with their lives. Suddenly, everything changes; a mysterious energy dome has appeared over most of America, killing the entire population. America is not just gone, but utterly inaccessible. The Wave, as it becomes called in the book, is beyond explanation. Anyone who goes into it dies. 99% of America and parts of Canada, Mexico and Cuba are wiped out in a split second. The world has changed beyond belief.

Birmingham mingles a cast of fictional and real-life characters (including Tommy Franks and Linda Lingle) as they struggle to deal with a world turned upside down. An American reporter in Kuwait finds himself recording stories that no one will ever hear. A crew of smugglers find themselves caught up in the chaos, trying to find safe haven. A civil engineer in Seattle struggles to save what remains of the United States. The CO of Gitmo, right on the edge of the Wave, tries desperately to preserve some order as the world collapses into chaos. And an American intelligence agent, lost and alone in Paris, finds herself trying to escape the madness as the city falls into darkness. Birmingham’s understanding of human nature is generally very good and, with one small exception, the cast responds in a believable manner. Very few of them, I do note, sit down to pray.

In a series of rapid-fire chapters, Birmingham charts out the course of the post-US world. Saddam sends his troops into Kuwait, intending to wipe out the remainder of the US presence in the Middle East, while Iran joins the fighting and engages US forces directly in the Gulf. The massive economic collapse across the world spurs on rioting and outright civil war in parts of Europe. Israel, faced with a world without America, launches a pre-emptive nuclear attack all along the Arabian Crescent. And the surviving Americans, lost and running out of supplies, find themselves dependent upon a wide range of nations for survival. It is not a cheerful world. By the end of the book, Russia is a resurgent power, China is collapsing into civil war, India and Pakistan are on the verge of a nuclear war and Europe is becoming a fascist state.

Yet the book is more character-driven than action driven. This is sometimes a good thing, yet there are areas I wish were explored more, such as the situation on the ground in a dozen different places. What is happening in the UK, for example, or inside Iraq or Iran? The war that erupts in the Middle East is seen only through a glass darkly – I wish, really, that there had been more chapters set there. Birmingham has learned his art far better than in the Axis of Time books, but the story is not without problems.

Birmingham also looks into the underlying reasons for the War on Terror – why we fight. We are up against a mindset that believes in a Manichean struggle between good and evil, with anything justified in the name of Allah. He exposes the western peace movement as largely composed of the fools and the blind; one of the characters blithely informs a POV character that they knew what happened to some Muslims at the hands of other Muslims, but America was worse. It is a logic that simply doesn’t stand up to scrutiny. It is seductive only to those who wish to believe in peace and equality. It is the peace and equality of the grave.

It’s worth noting that the book suffers from two plausibility problems. The first is simple; Puerto Rico and Alaska seem to be completely unmentioned, despite being untouched by the Wave. The second is more complex; I could buy a major period of civil unrest in France easily, but not outright civil war and certainly not what Birmingham portrays. (His logic isn’t bad, but it doesn’t apply to real life.) I know that the French seem to have a tradition of summer riots in Paris every year these days, but Birmingham takes it well over the top.

But leave those points; Without Warning remains an impressive and ambitious read.

[Editor's Note: See my review of the sequel After America - Mitro]


* * *
Chris Nuttall blogs at The Chrishanger. His books can be found on Amazon Kindle.
Posted by Mitro at 11:00 AM