Showcase: The Tales of Alvin Maker 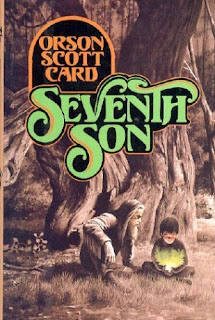 Few authors have managed to master science fiction, fantasy, and alternate history effectively and as skillfully as Orson Scott Card. Given his ability to cross genres without sacrificing the quality of his work, it makes perfect sense that he is one of the few people to pen a work that manages to be of all three genres at once, and fitting in with this months theme, is one of the more fascinating balkanized America scenarios I’ve come across. This my dear readers, is my look at Orson Scott Card’s series of Tales of Alvin Maker.

The story revolves around Alvin Miller, the seventh son of a seventh son, which among the divided and superstitious folk of the Americas, whose various inhabitants have knacks and powers of varying powers and types, makes him a child of particular importance. Specifically, thanks to his birth, Alvin has a knack which allows him to change both living and nonliving matter simply by force of will, else wise known as a Maker, the last of whom died on Calvary - though some insist Ben Franklin was a Maker himself. As he grows older, and his knack stronger, Alvin feels a burden to use his power to protect those near him and for the good of all - and to face an ominous universal force of destruction known as the Unmaker.

The series itself follows Alvin as he realizes the bounds of his powers, and interacts with a diverse and fascinating group of characters, some fictional, and some historical (albeit most are different), boasting a cast that includes the traveler Taleswapper, the brother chieftains Ta-Kumsaw and Tenskwa-Tawa, Quebecois generals Napoleon Bonaparte and Marquis De La Fayette, river man and rogue Mike Fink, and even King Arthur Stuart of the Crown Colonies. Real, fictional or altered, all are fascinating to follow and watch grow before your eyes, and make the story of Alvin all the better.

Of course, the way Card shaped his magical and divided America is worth reading the series for in its own right. The world diverged from our own starting with the English Civil War, with Cromwell and the Commonwealth remaining in control of the British Isles until the present, as well as retaining control over a still Puritan New England currently governed by an aging John Adams. Having never returned to the throne in London, the Stuarts set up a Kingdom-in-Exile in the Southern Crown Colonies, with their seat of power in Camelot. Not wanting to see his native Pennsylvania caught in the crossfire of a colonial civil war, Ben Franklin declares the independence of the United States under the American Compact whose seven initial states includes Pennsylvania, New Sweden, New Netherland and even the Irrakwa, and during the course of the series, integrates Appalachee, a nation forged by Thomas Jefferson and other Republican-leaning citizens of the Crown Colonies who fled to live among the Cherriky. The French still control Quebec and Canada, the Spaniards have Florida and a region surrounding Nueva Barcelona, and the entire continent stands on the brink of a war that will likely shift the balance of power entirely. The maps are worth pouring over for hours, for the obvious and subtle details changed, and the reasons why gradually given over the story make for fascinating world building, as does the way they divide the magic between races and cultures, the Europeans knacks pulled from folklore, the Native Americans typing theirs to nature or blood rites, and the African slaves channeling their skills into objects of power. Altogether, it makes for a world unlike nearly any other I've seen in alternate history, fantasy or any genre.

Needless to say, the series is a must for fans of card, AH, fantasy or just great world building and characterization. The series is among one of my all-time personal favorites, and was one of the works that got me into alternate history, and is a great example of how to do it right and very creatively, to say nothing of providing a gem of a Balkanized America scenario. The series is currently six books long and awaiting its seventh, and final book, due out in the next couple years. Needless to say, I recommend you pick this series up before then, and when the final book comes out, you'll be the first to here about it here. Until then, may your knacks stay sharp and your hexes honed, and may the Maker be with you until we meet again.

Soldier, scholar, writer and web-voyeur, Sean CW Korsgaard has been active in the alternate history community since 2006, and was recently elected to succeed Mitro as President of the Alternate History Online Facebook group. In addition to his contributions at the Alternate History Weekly Update, he writes for several websites, including his own, which can be found here.
Posted by Korsgaard at 8:48 PM