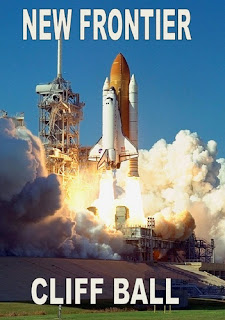 Politics is rarely an ingredient for a good alternate history.  While most authors will attempt to lessen the impact of their own political beliefs on the story, those who do not will often find that their story suffers for it.  New Frontier by Cliff Ball is no exception.

The POD for this world is Robert Kennedy being convicted of murdering Marilyn Monroe.  Afterwards, John Kennedy's two terms, Barry Goldwater's two terms and several prominent Democrat politicians either killed off or transformed into stereotypical liberals.  Jimmy Carter is made to look like the enemy of the space program (while even NASA admits he was the least supportive president, he did contribute the message sent with the Voyager probe and was a proponent of planetary exploration) allowing Ronald Reagan to be elected President in 1976.  Reagan goes on to declare that America will establish a colony on the Moon and Mars.   The Soviets try to one-up him by building a nuclear-powered interstellar starship with a computer using technology stolen from a young Bill Gates (the reference to the blue screen of death was amusing) that can apparently break the light barrier.

This is where things start to become implausible.  While a better-funded space program might have accomplished some of the goals that Ball described in his novel, the idea that the Soviets (whose space program was insane to begin with and did not always have the reputation for their engineering ability) could  build a starship that could reach FTL speedy simply by going faster then light takes a concept that is already controversial in scientific circles and makes it seem implausible to the extreme.

Though the cover and description seem to suggest that the story will focus on the alternate space program, Ball spends an inordinate amount of time Earthside.  Iran still has the hostage crisis in 1979, but Reagan handles it differently then Carter and is more successful.  In this ATL, however, Osama bin Laden is working with Ayatollah Khomeini who even calls Osama his "apprentice", which makes him sound less like the religious and political leader of Iran and more like a Sith Lord.  Nevertheless, this pairing is very implausible.  The issues between Sunnis and Shias are well documented and Osama is on record as saying that Shia Muslims are one of the four principal "enemies of Islam" along with "heretics, [...] America, and Israel".  Worse yet is America's reaction to Osama's revenge on America, which includes the mass expulsion of American citizens due to their religion, an action very out of character with America society.

The writing was poor, with too much tell and not enough show.  Plot and character development was minimal, in truth the story was just a retelling of the events stemming from the original POD.  What really hurt this book, however, was the author's political bias.  Though S. M. Stirling would lecture me that only an idiot would take a character's viewpoint as the voice of the author, too often I felt I was being preached at instead of being told a story.  While the next volume in this series might be a better, I cannot recommend New Frontier.