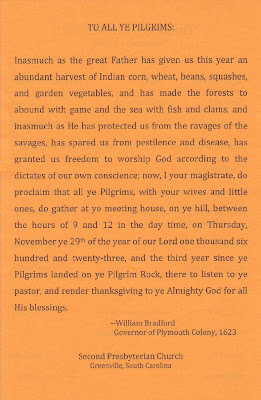 Thanksgiving Day
November 24, 1983
Well, I had been wondering whether we would be celebrating Thanksgiving this year since things went so bad for the nation two months ago. But Mayor Workman proclaimed the regular national holiday should go ahead 'on schedule.' And there have been community events planned at local schools as old fashioned grills and barbecue pits have been prepared since November 1st. The bulletin boards at Bi-Lo and K-Mart have had the notations up for two weeks, inviting everyone that can to bring dishes for a feast to be remembered even as we head into what may be our last winter on earth!

Well, that was my thoughts as I was getting in the church van to go to Second Church last evening anyway. Debbie actually had the day off at the hospital -- which means she'll be working Christmas! -- so we all were all together at the annual thanksgiving prayer service at the church. Since an elder at the church is in the printing business, church literature has given him business that otherwise is slim. Of course, with no new supplies available, local sources are going to have to be stretched. I'm clipping the program to this journal because the backside has the "first thanksgiving proclamation" in the Plymouth Colony (1623). My wife's ancestors, John Alden and William Brewster were there to here it proclaimed.

The service went well even in candlelight. The church had its usual community meal, so many non-members stayed for our service. There were many stories of surviving without the niceties of electricity and running water, as well as stories of kindnesses offered to and from neighbors unknown just two months ago. Local business men offered services to members and others to provide everything from firewood to digging wells to get us through until some level of services can be restored. City and county council members were making the rounds at churches coordinating plans to get the people they represent through the coming winter - which some say will be severe.

This morning I dug the pit a little deeper and cooked up extra green-beans to share at the dinner being held on the Berea Elementary School campus right between Bi-Lo and K-Mart. It turned out to be quite an event. It turns out that the mayor pro temp had chose "our" event to attend. Mayor Workman had attended the much larger event on the campus of Bob Jones University. I had considered catching a bus over to BJ with the family, but I have really started to connect locally so we went to our local event. Open pit barbecue was the 'main course' though both rotisserie and deep-fried turkey were available in smaller amounts. Bi-Lo had made sure there was a supply of cranberry sauce, but the managers rationed it out - opening cans periodically instead of all at once. It turned out that many people are fine without the traditional sauce. There may even be enough to get through Christmas this way.

After the feast, there were games and such reminiscent of the nineteenth century. I am writing this even as it is beginning to get dark outside. We had our oil heater converted to a wood-burner and have a supply of wood that may last about a month if we don't heat more than the two bedrooms on either side of it - and only when it gets below 50 degrees or so. Sweaters and coats will have to do before that. It has turned out to be a good holiday. Only 31 days until Christmas!