It is every would-be-writer's dream to see his work in print. I know it has been mine since I first took up the pen as a school boy, and though I am somewhat closer to achieving that goal as I write articles for an increasingly diverse number of websites, the end goal of seeing one of my fictional works published has remained constant through the tide of years. So when a friend of mine tells me that he recently made the first pro-level sale of his career, I take notice.

Known in various AH circles as MerryPrankster, Matthew Quinn is a writer, journalist and fellow blogger who has proven more than happy to give me both tips about my blog and advice on how to better my own writing career. In addition, he put in a good word for me at the Dudeletter which resulted in me getting my first writing job outside of my blog (with this site being my second). So imagine my surprise when Quinn tells me he just made his first professional level sale of his writing career.

Turns out his short story Coil Gun will be headlining the most recent issue of Digital Science Fiction, and even was the inspiration behind the cover. Knowing his work from his blog and various other projects, I knew that his story alone would be reason enough to pick up the recent copy of Digital Science Fiction. The question I'm sure many of you are asking, is it worth your money? Fear not dear readers, I, your humble narrator, am here to review it for you. 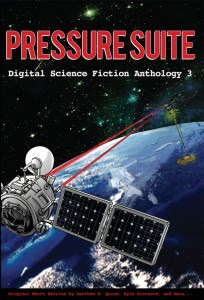 The story itself, though in a science fiction setting, is primarily an alternate history. You can find the entirety of that world's divergent past here, but the abridged version is a group of Dutch Calvinists settle on the Cape Coast in Africa around the late 1500s, and in the following centuries expand into becoming one of the world's preeminent superpowers, dominating much of the Indian Ocean rim, and is locked in a Cold War with the USA and its allies - a Cold War that over the course of the story, erupts into WWIII, with nuclear weapons and kinetic bombardment - the titular 'coil guns' - devastating both sides.

The story follows the folks inside two control centers - one Afrikaner, one American - as they coordinate the attack on the enemy and contemplate the effects the war will have on them and their homeland. Coil Gun depends a great deal on it's superbly done characterization, and makes you truly care about what happens to the folks on both sides of the conflict - no small feat when one side of the war is made up of Afrikaners bent on racial and religious superiority. The technology and tactics used are well described, as are passing events, yet not too overly detailed as a lot of writers fall weakness to. It's well-paced and tense, as any story about WWIII should be, and unlike a lot of short stories I've read, it felt wholly satisfying on its own, without need to go further in depth.

So in the end, I have to tip my hat to Quinn - if Coil Gun is any indication of his abilities as a writer, Quinn is someone we all will need to keep on our radar, and for the moment, Coil Gun is a superb little short story. With that, I can wholly say that Pressure Suite, as the latest issue if Digital Science Fiction is titled, is well worth picking a copy up. Having read the rest of the anthology, I can say its well worth a read, and Quinn and his Coil Gun are a big reason why.

Soldier, scholar, writer and web-voyeur, Sean CW Korsgaard has been active in the alternate history community since 2006, and was recently elected to succeed Mitro as President of the Alternate History Online Facebook group. In addition to his contributions at the Alternate History Weekly Update, he writes for several websites, including his own, which can be found here.
Posted by Korsgaard at 11:15 AM