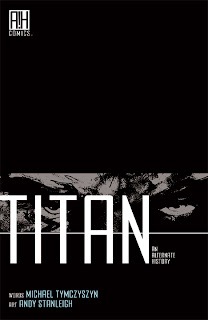 Sometimes important events occurred (or failed to occur) all because of the choice of one person. For example, what if Patrick Ferguson took his shot when he had General George Washington in his sights? Some could even say that our history is nothing but the sum of our choices. But what if that history was all because of one man?
History professor Peter Tytan inhabits a world similar, yet different, from our own. The Pope resides in the Kingdom of Jerusalem and Benjamin Franklin Buter was the 22nd President of the United States. Yet Peter does not take this for granted, this is all he has ever known. When one of his graduate students writes a paper suggesting that their history does not make sense and seems to be all be the results of the action of one man, he tries to talk her out of it to prevent her from ruining her career.

That was before, however, he was robbed, beaten and drugged. Suddenly Peter begins to hallucinate and starts reliving memories of past lives. A Scythian king who tried to conquer China, a slave who stood against the armies of the First Crusade and a wealthy industrialists with dreams of being the next president of the United States. Peter is changing and learning his true destiny...and the entire world shudders because of it.
Titan: An Alternate History (by Michael Tymczyszyn and Andy Stanleigh) is the first book published by Alternate History Comics, Inc. and represents what I love about independent comics. They are not held down by the censorship and confusing continuity of the major publishers. Instead they present to you a rich and compelling world which does not ignore the darker parts of humanity and leaves the reader wanting more. Meanwhile, the artwork was beautiful. Each era of time had their own style. Sadly I do not have an appreciation for art that will enable me to give you a good explanation of what I saw, but trust me, you will like it.
As an alternate historian, however, I have to knock down Titan's grade due to plausibility. Purists will not like the fact that even with changes reaching as far back as the B.C. era, history has still not diverged greatly from our own. In the present day of the comic we do have a United States of America, despite the fact that it would likely have been butterflied out of existence.
Nevertheless, I still recommend Titan for comic book fans and alternate historians alike. It is a fresh breath of air in a medium that is often dominated by way too many capes. By the way, the guys at AHC are running a special where if you order your copy before August 26th, it will be signed by both authors. You can also check out the animated trailer for Titan on YouTube.
Posted by Mitro at 11:00 AM