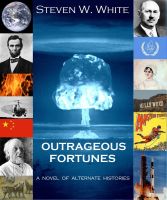 As an alternate historian, have you ever wanted to travel to an alternate timeline?  Step through a wormhole and arrive in a place where history is different, yet familiar, from your own reality?  What about having a conversation with your alternate self?  What would you talk about?

In Outrageous Fortunes: a Novel of Alternate Histories by Steven W. White, the main character Randy Sullivan is a blogger and amateur historian.  Randy lives a tough life.  His parents died in a car crash, forcing him to put his dreams on hold so he could take car of his younger brother and sister.  Meanwhile he is completely smitten by his friend, the beautiful Penelope, but is afraid to ask her out for fear of rejection.  Everything changes when he is approached by his double from an alternate timeline.

Calling himself Sully, this alternate Randy is a brilliant physicist and inventor who discovered the secret of "sideways" travel.   Sully takes Randy on a journey across the multiverse, showing him bizarre Earths and the wonders they contain, tempting him to abandon his family and choose a new reality to inhabit.  Yet not everything is as it seems.  In Randy's reality, wildfires threaten Randy's home, his family and the love of his life. Meanwhile, Sully has a secret agenda and Randy may regret ever agreeing to accompany him on this journey.

Outrageous Fortunes was a delight to read.  Randy was able to live through every sci fi nerd's dream.  Flying cars, jet packs, space elevators, Revenge of the Jedi, sexbots, intelligent dinosaurs, why not?  You can also tell White is a fan of alternate history.  For example, he knows what alien space bats are.  One even makes an appearance when...well I will not spoil that for you.  Lets just say I would not want to be in whatever reality that arbitrarily advanced extraterrestrial flying mammal takes his revenge on.

I was annoyed  a little by the number of spelling and grammar errors throughout the book.  For example, at one point White accidentally calls Randy a different name.  Outrageous Fortunes is also not in hardcopy form (yet) so you will need to read it using an e-reader.  Hopefully it does come to print soon because the novel is fun adventure that any alternate historian could enjoy.
Posted by Mitro at 11:00 AM