Surpassed 1000 page views on Tuesday. It was an excellent birthday present. Plus we got our first readers from Malaysia, Lithuania and Ukraine.

I also hope you all enjoyed my interview with Mark Lord. I plan to do an interview once a month and I am still trying to get a chance to talk to a Sidewise judge, so stay tuned. 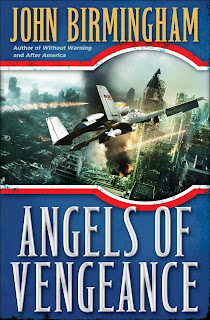 Angels of Vengeance is the third (and final?) book in Australian author John Birmingham's alternate history series. It comes out April 10, 2012, but for me it cannot come sooner. I really enjoyed the first book in the series, Without Warning. The story involved the aftermath of "The Wave", an energy field that causes most of the populations of United States, Canada and Mexico to disappear on March 13, 2003 (on the eve of Operation Iraqi Freedom). All that is left of America is Alaska, Hawaii, a small enclave around Seattle and America's oversees possessions. For those who thought the world would be a better place without the United States, Birmingham responds with a horrifying depiction of global economic collapse, ecological disaster and genocidal war. Birmingham has a Stirling-esq way of destroying worlds and shares that author's tendency to use strong female characters who could kick your ass and look good while doing it.

It took me sometime to get to the sequel, After America, because I have burned before by poorly planned sequels or prequels (damn you Lucas). Nevertheless, it was obvious there was going to be a sequel since at the end of Without Warning (SPOILER ALERT) the energy field that vaporized anyone who tried to cross it disappeared opening North America to recolonization. I finally just started reading the sequel and I am very interested in how the rump United States handles repopulating the empty country. Already it appears that the policy of the current administration is that anyone can get in as long as they work a certain number of years for the government (they have not yet called it indentured servitude, but yeah it is like that).

Hopefully I will have a review of After America for you all soon, until then read Without Warning if you have not already.

Who are the Best Writers of Alternate History?

Who do you think are the best alternate history writers? Vic Richardson at InfiniteSpectra Blog listed (in no particular order) who he thought were the top five: Philip K. Dick, Harry Turtledove, S. M. Stirling, John Birmingham and Eric Flint.

It is a difficult question to answer in my opinion. What criteria do you use? Certainly Turtledove belongs near the top of that list, being one of the most prolific alternate history writers out there, along with being responsible for introducing the genre to many alternate historians. The other authors are certainly just as influential, even if they cannot claim the title of "master of alternate history".

Stirling seems to have an innate ability to create (or destroy) worlds that are both fascinating and horrifying. Flint's 1632 series is probably the most successful shared universe in the genre, while Birmingham was able to marry the tech-thriller genre with alternate history. Last, but not least, Dick's The Man in the High Castle is a must read for alternate historians and a great example of a double-blind what if.

Still I feel there are so many authors who deserve to be on that list. L. Sprague de Camp's 1958 novel Lest Darkness Fall inspired so many of the alternate history writers who came out of the 1980s that he can be credited with creating the genre itself. Than there was Robert Sobel's For Want of a Nail, which is a favorite for many of the pioneers of online alternate history. In fact the list of alternate history authors is very long.

That is why I need your help. Comment on this blog or email me at ahwupdate@gmail.com who you think are top five best alternate history writers. Once we narrow down the list I will start a poll to decide, once and for all, who is the best.

Summer escapes into science fiction and fantasy - Has a short review of Harry Turtledove's The War That Came Early.

5 insane scientific theories about our big stupid crazy universe - Including the multiverse. Hopefully evil Spock is not reading this.