Wow, my tenth post. With AHWU being a month old, I want to announce a goal of mine. By June 19, 2012, this blog will have 300 Facebook fans and 100 Google followers. So if you support AHWU, like us on Facebook or follow us on Google. Only with your support can this project continue.

A few announcements to get through. First, I got my first readers from Latvia and Bulgaria, which means I am finely making leeway into the old Soviet bloc. Welcome!

Second, I want to introduce our newest contributor, author Deborah Teramis Christian. Keep a look out for her next post and in the meantime go check out her blog.

Finally, tomorrow I will be publishing my interview with Mark Lord, editor of the Alt Hist magazine. So keep an eye out for that.

The Dangers of Crosstime Travel

For any fans of Piper's Paratime series, Turtledove's Crosstime Traffic series or any other body of works that deals with interactions between alternate universes; the ability to travel through the multiverse might seem to many to be a ticket to unending adventure and riches. In reality, it may cause civilization as we know it to collapse. Here are a few dangers to keep an eye out for if we ever perfect crosstime travel:

1) Disease: Native Americans were isolated from the rest of the world prior to 1492 and thus they did not gain the immunity to various disease the rest of humanity gained. The arrival of Columbus and other Europeans changed everything and introduced diseases to a population that was not prepared for them. While the exact die-off is unknown, even conservative estimates put it into the millions. This same issue can happen with crosstime travel. We could stumble upon a timeline where some common disease that does not threaten humanity at all mutated into the cause of the zombie apocalypse.

Preventing some viral outbreak could be next to impossible depending on the method of travel. If crosstime travel depends on a stationary location, than quarantine could prevent an apocalyptic outbreak. If the device necessary for crosstime travel, however, can be carried in an individual's pocket (like Sliders) than preventing unlicensed exploration of timelines would be impossible to prevent.

If one could find worlds more technologically advanced one could use that tech (e.g. robots, AI, nanotech factories, rejuvenation tech using microfluidic devices) to an unpopulated world and create a luxurious community in a clean environment with no terrorism or pollution or resource depletion. On the other hand, if multiverse travel is possible how soon till multiverse invasions by hostile species?

I disagree with Park on one of his point. You do not need contact with another species before the threat of multiverse invasions becomes a reality. Instead of worrying about evolved raptors (like the ones from the Destroyermen series), we should worry about other advanced humans. Throughout human history, when an advanced culture came in contact with less advanced culture, the more advanced culture subjugated the other. You only have to look at a map of the world from 1914 for proof of this concept.

So if we stumble upon some advanced civilization on another timeline, we may be inviting them to attack us. Maybe they are desperate for resources, having used up their last deposits years ago, in competition with another crosstime capable Earth to grab as much of the multiverse as possible (much like the Scramble for Africa from OTL), or they have some ideological drive to spread their beliefs wherever there is some "unenlightened" population. Regardless of the reasons, could we stop them? What are our counter-measures to nano-swarms that would disassemble our weapons into piles of dust, biological agents that would turn us into meek slaves or space stations that could rain down nuclear fire at any signs of defiance?

For this reason alone, keeping the secret of crosstime travel of other alternate timelines is paramount to the survival of our own civilization.

3) Mass Suicides: Larry Niven published a short story called "All the Myriad Ways". It is set in a timeline where the Cuban Missile Crisis escalated to a nuclear war. At the present time in this universe, crosstime travel has been invented and the corporation that invented it now profits from their discovery by the technology they discover from other Earths. The main character is a detective who is investigating an epidemic of suicides and murders. At the end (SPOILER ALERT) the main character realizes that the known existence of an infinite mulitverse means that all possible choices that might be made are actually made in other timelines, thus making free will meaningless. By committing suicide or committing murder, the person is abandoning the sense of choice.

Now whether Niven's depressing scenario is realistic is matter of opinion. Nevertheless, science fiction has a pretty good track record when it has come to predicting the future. There is also plenty of proof that people do not always have a healthy reaction to the harsh reality we inhabit. In my opinion, Niven's idea scares me enough that research should be conducted on the psychological impact of crosstime travel before it is to late.

4) Ecological Disasters: Often when we speculate on other timelines, we also discuss how human choices are the main cause and effect for the existence of the multiverse. In reality, the vast majority of all the timelines that make up the infinite multiverse have nothing to do with humanity. Consider the vast number of animals that exist today or have existed. Could there choices be factored into account? We are not talking about timelines with centuries of alternate history, but with billions of years worth of difference. Among these timelines could exist a collection of species and plants that are unrecognizable to anything that does or did exist on Earth. Now what would happen if they were unleashed on our Earth? What could an invasive alien species do to our environment? Already the ones that exist today cost billions of dollars a year, but the existence of some unknown species from some alternate Earth could possible mean apocalyptic conditions for our own Earth.

Conclusion: I write this article not to discourage future exploration of the multiverse. Instead I only suggest that the future chrononauts take the necessary precautions to protect our Earth from the dangers that may exist in the multiverse.

I love listening to podcasts at work, but I was disappointed that there were no alternate history podcasts to listen to. Now in just a month I have found two...and maybe even a third one.

I'm not sure what to expect from these guys, but if anything more substantial comes I will let you all know. 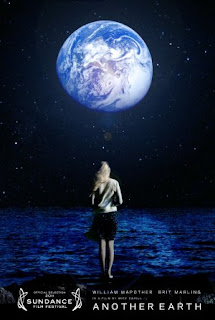 Coming this Friday to theaters in the United States and Canada will be the independent film Another Earth. Here is the plot synopsis from Wikipedia:

Rhoda Williams (Brit Marling), a physics student at MIT, is driving when she sees a planet and leans out for a closer look. She hits a minivan and kills a family. She is imprisoned for four years, and upon release seeks out the widower of the family, composer John Burroughs (William Mapother). The planet she saw is a mirror planet of Earth, seemingly to the extent that it even has the same people on it, and an essay contest is held where the winner can ride a space shuttle to visit it. Williams considers the possibility of visiting it to find out what kind of life her mirror self would have led.

While the movie's alternate history content may be minimal, the film still touches on some of the psychological issues inherent with the existence of a parallel Earth. It should be interesting and I plan to watch it if I can find a theater nearby that will show it.

We Don’t Live on the Moon Or Have Flying Cars, But We Do Have a Black President: What Science Fiction Can Teach Us About Barack Obama - An interesting articles that discusses how race is portrayed in science fiction and its effect on American politics.
Posted by Mitro at 11:00 AM