Weekly Update #233! Time After Time Picked Up by ABC and More

You would think a Weekly Update that could pull from two weeks worth of content would be pretty large, but sadly I needed time to finish making a video so this one is going to be highlights only. Sorry guys, just trying to get a good rhythm going after missing last week's Weekly Update.

Speaking of my channel, it now has its own Twitter handle. Please follow it for updates on my videos.

Time After Time Is Picked Up By ABC 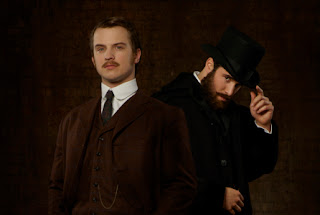 ABC announced last week that they are making a television show based on Karl Alexander's novel, Time After Time, which follows what happens when H.G. Wells actually builds a time machine, but it is stolen by Jack the Ripper and HG Wells has to travel to the future (our present) to track him down. There was also a movie based on the novel, starring Malcolm McDowell.

According to Deadline, Time After Time stars Freddie Stroma as H.G. Wells, Josh Bowman as John Stevenson/Jack the Ripper, Genesis Rodriguez as Jane and Regina Taylor as Vanessa Anders. It will be produced by Outerbanks Entertainment in association with Warner Bros. Kevin Williamson and Marcos Siega, who also directed the pilot, are executive producers.

Time After Time is expected for the Fall 2016 season. Are you going to watch?

They are back. Epic Rap Battles of History begins season 5 with a showdown between the two titans of fantasy literature: George RR Martin and JRR Tolkein.


Also, in case you missed, don't forget to check out Alex and I discuss 1984. In case you didn't know, it inspired Rvbomally's article on why alternate historians love dystopias.
Speaking of Rvbomally, if you like his works, go check out The Persephone Foundation on YouTube. They have a couple videos based on the scenarios he created.