AlternateHistory.com was down this weekend for an upgrade and there were many alternate historians who didn't know what to do while they waited for the forum to come back. Some suggested checking out other alternate history sites, which I thought was a great idea. In fact, lets look at an alternate history map from outside the forum: 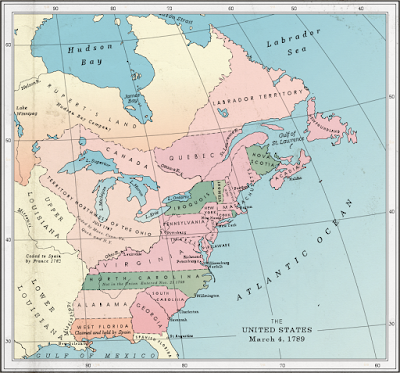 This is "Alternate North America 1789" (a.k.a. "The Revolution's Rangers" and that link will take you to a short timeline) by YNot1989 and I found it on Imaginary Maps subreddit. In this timeline the Americans, with the help of wealthy inventor Theodore Bell of New York, mop the floor with the British early on in the American Revolution thanks to better technology (repeating rifles, steam engines, etc.). By the time of this map, the United States includes Canada and there is the unrecognized state of Iroquois. Slavery is ending as steam tractors are cheaper then keeping a plantation of slaves and it looks like it will be abolished when the new Constitution is finally adopted.

As far as I can tell, this timeline is based on another YNot1989's timeline, "Our Revolution", which can currently be found on the AltHistory Wiki. The point of divergence for that timeline is that Theo, his friends and their school's campus in 2010 Arizona is sent back in time to 1775. Considering that the point of divergence for the map is actually 1773, we may consider this an update of an old idea. Still I like the old fashioned look of the map and the soft colors. I'm curious why the revolutionaries didn't also get Florida (since it was British territory at the time) as well considering how good they did early on in the Revolutionary War, but it is a minor nitpick in an otherwise good map.

Honorable mention this week goes out to "Pilgrimage of the Faithful" and "Kingdom of Poland 1917" by Zalezsky, "The Hajj to Earth" by Krall and "A map for the Earth of Radiance by Catherynne M. Valente" by Bruce Munro. If you want more mappy goodness, go check out Lynn "ToixStory" Davis' Map Commission Guide and San's "The Proportional States of America".