Soviet style flags can be ugly sometimes, but they still have a lot of potential in the alternate history community. I see a lot of people making communist flags for historically capitalist nations, like Norway: 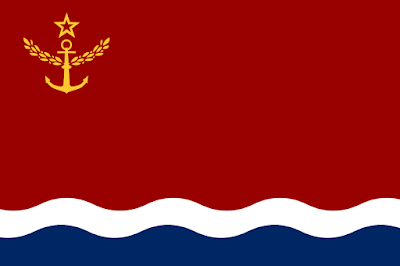 This is "Communistic Norway" by AHNorther71. There are actually two versions of this flag. The one you see above and one where the white and blue stripes are straight. Personally I liked the wavy lines, hence why I am featuring it today on Flag Friday. Anyway, here is the description of the flag of AHNorther71: "The anchor and the branches are bound together to represents the unification between labourers of the sea and land. The star represents unity and progression." I am assuming the blue represents the ocean and the white could be...mountains, snow, the purity of the proletariat...I don't know, you decide.

The question we need to answer now is why would Norway become a Communist state? Norway did have a socialist economy post WWII, but established closer ties with the United States and other western nations. Perhaps America sinks back into isolation following the end of the war and Norway has no choice but to court the Soviets and eventually reforms themselves in the process. Perhaps the German plan to use Norway as the last bastion of the Third Reich is carried out and the Soviets advanced further into Norway to finally defeat the Nazis. This could have left Norway a part of the Warsaw Pact in the alternate Cold War.