Another week in the multiverse. I finished reading Eagle in Exile by Alan Smale and should have the review up Tuesday on Amazing Stories, along with New Releases on this site. If you haven't read it already, you should also check out my review of Clash of Eagles. Additionally, my interview with Alan will be up on SFFWorld this Wednesday. Not sure what I will post Thursday, but I'm sure I will think of something. That being said, if you would like to submit a guest post for that day email be at ahwupdate at gmail dot com.

Geeze I have been busy lately, especially when you add the script for my next video on Terry Bisson's Fire on the Mountain and other videos that I am planning to produce in the weeks to come. Juggling the different blogs, websites and the channel can be tough at times and I am not even factoring in my day job or the adoption.

Before I end this Editor's Note, I need to say that you should check out Flag Friday: Flags of the North Atlantic Pact Organisation by Marc Pasquin. It did extremely well last week, probably because Marc is such a talented artist. Seriously, go visit his DeviantArt page and if you commission anything from him, tell him Matt sent you.

Comic of the Week: Rough Riders #1 by Adam Glass and Pat Olliffe

Steampunk and secret history collide in the new comic series from AfterShock Comics new series Rough Riders. Here is the description from Amazon:

This new series got a lot of press actually and was featured on USA Today. I'm actually really curious about this series. It may be a lot of fun, but it does seem multiple people are writing Theodore Roosevelt inspired fiction. For example, SM Stirling is writing a new book called And Carry A Big Stick, which features a quasi-CIA agency created by Roosevelt (and airships). Personally I look forward to more fiction featuring America's toughest president and hopefully Rough Riders will really capture how awesome Teddy was.

Speaking of steampunk, the film April and the Extraordinary World has been getting a lot of press lately. If you want to see what all the fuss is about, check out this clip:

And if you want more alternate history goodness on YouTube, don't forget to check out Alana and I sharing our thoughts on Season 1 of Starz's Outlander:

In case you didn't know it, I love Polandball and I especially like it when the various artists go down the alternate history path: 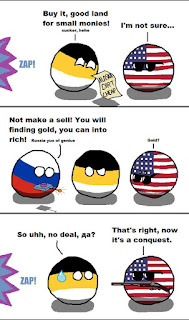 If you want to learn more about my thoughts on Russian America and how they could have kept Alaska, check out this video.