Weekly Update #223! And Carry A Big Stick, A Fair Use Rant and More.

Last week my name and this blog appeared several times on SF Signal. In case you missed it, I was part of a panel of writers who talked about what makes for good alternate history. Then there was Sam McDonald's The Audio File: Beneath Ceaseless Skies, Apex Magazine and Far-Fetched Fables, which was linked to on Friday's SF/F/H Link Post, while my Plausibility Review of Stephen King's 11/22/63 was linked to on the Saturday post.

I've been reading SF Signal before I even started blogging myself, so you can imagine how cool it is to see them following my own work. Thanks John and the rest of the SF Signal staff! 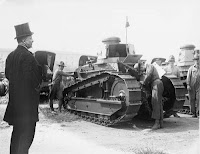 SM Stirling announced on Facebook that he has written the first few chapters of a new novel tentatively titled And Carry a Big Stick. Here is the direct quote:

Am doing up the first few chapters for AND CARRY A BIG STICK, the working title for my AH novel where Taft dies of a heart attack in 1912 and Teddy Roosevelt and the Progressives take over the Republican party, then crush Wilson in November. Teddy is a character, but not the central one. The plot involves the Black Chamber, which in this timeline is a sort of proto-CIA founded in 1914, and retaliation for the sinking of the Mauretania by a U-boat. There are airships!

This is kind of a big deal because while I do consider the Emberverse series to be alternate history (in a "what if alien space bats did X to Earth" sort of way) Stirling hasn't published any alternate history books outside of that series since 2008 when he published the In the Courts of the Crimson Kings, the second and last book in The Lords of Creation series. That is eight years ago, so I'm excited to see him delve into a new world.

Plus Theodore Roosevelt is one of those patron saints of the Internet (along with Tesla and Deadpool) so its cool seeing another alternate history story involving him. I'm looking forward to And Carry a Big Stick and will keep you posted on anything else I learn about it.

Video(s) of the Week (Plus A Fair Use Rant)

I already mentioned this earlier, but I posted a new video on my channel where I discussed how plausible Stephen King's 11/22/63 is. Check it out below:
Sorry for the long wait between videos. My plan to have a video up once a week didn't work out as I imagined, even with my new emphasis on guest posts for this blog. I'm going to aim for an every other week schedule for now and see how I do. I plan to do another Plausibility Review of Dick's The Man in the High Castle and post a final thoughts episode with Alana on the Amazon adaptation that will cover the remaining episodes and what we thought of the series as a whole. Plus I plan more Trope Talks and I want the next one to cover space filling empires.

Currently I don't monetize my videos on YouTube, but that could always change. If I make more money I can invest in better equipment and software. I would love to even use clips for the shows and films I plan to review...but that runs the risk of running afoul of YouTube's copyright claims system, which doesn't tend to take Fair Use into account at all. I could talk more about it, but I think the Nostalgia Critic and other YouTubers can explain it better:
Now blogging and making videos isn't my career. I have a day job, but I would love one day for this to be what I do for a living. That being said, I can sympathize with those who do make content for the Internet and how their livelihoods are threatened by it. Part of the problem stems from how difficult it is just to talk to someone at YouTube, as Cody Franklin of the AlternateHistoryHub found out when he was unable to monetize his videos for several weeks.

We all know that expressing criticism is an important part of living in a free society, and while I do not condone stealing someone else's copyrighted material, using said material in a review is excepted under Fair Use. YouTube and other sites that rely on producers like the Nostalgia Critic and Cody to draw in audiences to watch their ads need to know that such unfair treatment is not to be tolerated.

I'm not sure how to wrap up this rant (my original plan was just to tell you to check out the Critic's video, but things sort of spiraled out of control) so I will just end by saying that if you don't like it when videos from your favorite channels are taken down, spread the #WTFU hashtag and let Google know you are not happy.