For those who have watched some of the recent videos on my channel (The Alternate Historian) you may have noticed the art of a certain Marc Pasquin. He makes some great alternate history images and today's flags are no exception: 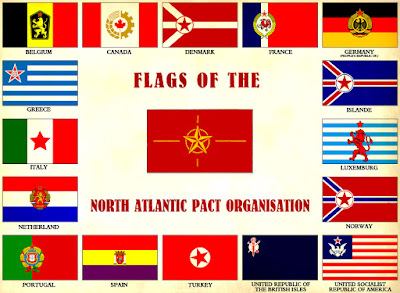 This is the "Flags of the North Atlantic Pact Organisation". Although there isn't much of a story with the flag chart, this is obviously a reverse Cold War timeline, especially with the reference Warsaw Treaty Alliance (although wouldn't the Eastern Europe Treaty Alliance be more appropriate?). I like to think the revolution began in the United States (i.e. Back in the USSA) and the other countries adopted communism after they were "liberated" from Nazi oppression. I especially like the flag of Canada. Its like what if Canada colonized the planet in Gears of War.

No honorable mentions this week, but seriously go check out Marc's work and consider hiring him if you need to commission some alternate history graphics.