Map Monday: The Kingdom of Great Britain (in the Guiana) by Birdperson

I am sucker for royal exiles (hence my video on the topic) so I immediately latched on to "The Kingdom of Great Britain (in the Guiana)" by Birdperson, a new member of AlternateHistory.com. Lets take a look at it below: 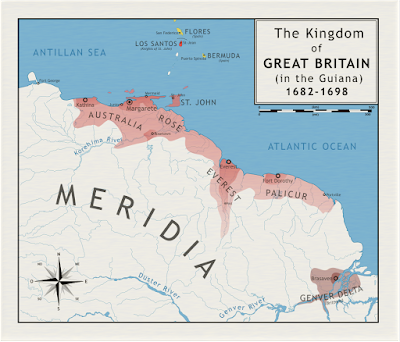 Although the events of the scenario take place in the 17th century, the story implies an earlier point of divergence involving the House of Lancaster not becoming extinct in the male line in the 15th century. Anywho, there is a republican revolution in Britain and Margarete, niece of the deposed king and heir-apparent, flees to their colonies in "Meridia" and establishes a kingdom-in-exile. For 15 years she rules this colonial nation before dying of fever and the colonies are reintegrated back into republican Britain.

First up the map looks great (and you can see a full sized version here). I am assuming its an Inkscape map and for what is Birdperson's first MotF entry it is a strong attempt. One nitpick: the Genver Delta colony at the bottom right should have been differentiated a little better. Since there are two Britains in this timeline, it could have said Republican British instead of just British, but like I said, its a nitpick.

Honorable mentions this week go out to two maps by Rebecca "Upvoteanthology" Stirling: "The Hindian Empire" and "The semi-independent Kingdom of Arraillur, in 1450".