Today's featured map is from Reddit, specifically /r/ImaginaryMaps, which is quickly becoming my favorite subreddit. It is titled "Commonwealth of New England 2014 House of Commons Election" and was created by ADS94. Let's check it out below: 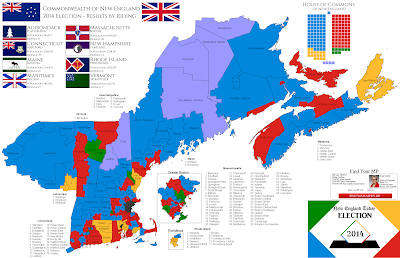 There is not much I can say about the story since I haven't read it in its entirety. From what I gleaned from the comments, this map is from ADS94's AlternateHistory.com timeline, "The Confederacy". Its a standard Confederate victory timeline, except told from the perspective of a British historian and the United States also fell apart after the Confederacy gains independence. The New England state and upper New York are apparently annexed by Britain, becomes a dominion and even gain some Canadian provinces.

Having not read the story its hard for me to comment on the plausibility, although even I doubt an independent New England would voluntarily join the British Empire. Close allies sure, but direct incorporation seems far fetched. Nevertheless, if you want to learn more on the actual election this map represents, you can read the faux-Wikipedia page ADS94 created for it.

As for the map itself, its fairly well done. I always liked looking at election maps and the multiple parties this alternate New England has means we get more colors instead of the standard reds and blues we see in our timeline's America. I liked the use of flags as well. If I had one major criticism, perhaps ADS94 could have centralized all of the county/riding names that were too big to fit on the map itself as they seem haphazardly placed. Otherwise its a good map.

No honorable mentions this week. Also I am no longer requesting submissions to Map Monday since I rather pick them myself. That being said, if you would like to submit a map and scenario to The Update, please email me at ahwupdate at gmail dot com.