This is a preview of what you could see if we reach my "Return of Flag Friday" milestone goal on Patreon. If you want to see more Flag Fridays in the future, please consider becoming one of my patrons. Now on to the alternate vexillology...

Two flags caught the attention of my followers last week and it was difficult to pick which one to write about. Both had scenarios attached to them, and you all know how much I enjoy a good story, but in the end I decided to go with the one that I thought just looked the "coolest". I am talking about Ramones1986's alternate flag of Albania: 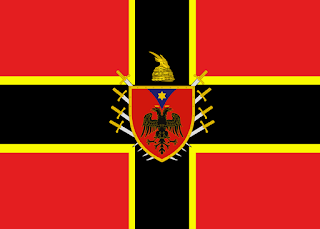 This is from a short scenario Ramones1986 published on AlternateHistory.com where Albanians gain their independence early in 1878 thanks to an Alabamian cultural renaissance brought on in part by a new Albanian alphabet that used the Latin script and was spread by British bibles. This unexpectedly makes Protestantism attractive to Albanian nationalists, who see it as a way to separate themselves culturally from the Ottomans. After a successful independence movement, with British backing, its implied other parts of the Ottoman Empire adopt the Albanian method in seeking more autonomy.

I like this scenario for a couple of reasons. First, you don't see Albania as the focus a lot in alternate history (in fact, this is the first time I ever used the "Albania" tag for the blog, so I am as much guilty of omitting the country as everyone else) and I am glad Ramones1986 went outside the box with this one. Second, the idea of Protestantism spreading through the Balkans is a unique concept. In this timeline, Protestants are rare in that region and to see a timeline where they are more numerous or even in the majority has some untapped potential. As for the flag, I admit I am crazy about the color black on flags. It doesn't happen often and for some reason it always looks pleasing to my eye, so I really enjoyed the black cross on this flag of Protestant Albania. Additionally, the coat of arms in the center was well designed. All and all, this flag deserved to be featured on Flag Friday.

Honorable mention this week goes out Mac Gregor's flag of the African Republic of Angola. If you would like to submit a flag for the next Flag Friday, email me at ahwupdate at gmail dot com with your flag attached and a brief description of the scenario in the body of the email.