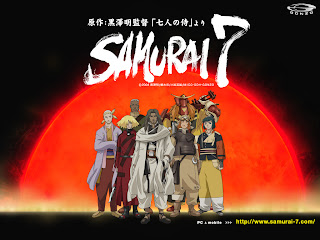 Seven Samurai – just the name alone brings pause to many people. Akira Kurosawa’s 1954 period epic, like much of Kurosawa’s work, is both rightly revered as a classic and has proven to be wildly influential to countless other films shaped by the story and style of the film. Also in true Kurosawa tradition, is the fact this has not been limited solely to films influenced by Seven Samurai – more than any other Kurosawa film, there have been countless remakes, reimaginings, and even outright rip-offs of Seven Samurai, ranging from the likes of The Magnificent Seven and Ocean’s Eleven to A Bugs Life to an upcoming modernized remake that shares the same title. Today however, I’m going to talk about one work in particular, the 2004 anime Samurai 7.

Most recently shown as part of the revived Toonami action cartoon block that, has by every measure, lived up to its pedigree, Samurai 7 ended its twenty-six episode run early last month, and it surprised me enough that I felt a full review was in order – for The Update especially seeing as how, much to my surprise, one could consider the series alternate history, for reasons which I’ll get to in a moment.

The plot of the series should be familiar to almost all of you – in Kanna village, peasant farmers, perennially harassed by bandits for their food and their daughters, are fed up, and seek samurai to defend to village, and being but farmers, can only offer their would-be warriors rice as payment. Eventually though, they do indeed find seven samurai who volunteer to protect the village, teaching them to defend themselves, helping to fortify the village, and leading the defense and counterattack against the bandits when they come – as well as uncovering and eventually confronting a conspiracy that will threaten to not only change Japan, but the wider world as well.

Okay, so maybe that last part is new, but the overarching story will certainly be familiar to anyone who has watched Seven Samurai or any number of the various films that used the same plot. Samurai 7 has a distinct advantage over many of these movies for a simple reasons – they have thirteen hours to tell a story a movie struggles to tell in two or three, and over twenty-six episodes, are able to take their time to develop the now familiar plot with great detail, and for the most part, do so without padding it unnecessarily, and develop both the cast of now immortalized characters and the alternate world of the series altered Sengoku Japan.

Just how is it altered you ask? It takes place in a Sengoku Era Japan that has been heavily influenced and changed by steampunk elements, making this, it least superficially, alternate history.  This can be found ranging from familiar genre elements like airships and eugenics to clockwork mechas known as ‘Machine Samurais’, lethal cyborgs formed from a process that consumes all but the sentience of a human volunteer, people who include the bandits and Kikuchiyo, the clownish seventh samurai immortalized by Toshiro Mifune in the original film. While strange at first look, it makes the show all the more fantastic, and allows many new plot elements and themes to be added to the overarching story of the show, and while some of this may be strange or seem needless – I’ll get to one way in a moment – in others, it adds depth that serves the series very well, most notably in the form of an overarching theme that the samurai of the era see the writing on the wall concerning their livelihoods – they see the wars of the future as one of gunpowder and the much maligned mechanized samurai as opposed to katana and bushido, making one of the shows overriding conflicts being the samurai hoping to prove there’s a place for themselves in this brave new world just as much as the peasants who hired them.

Speaking of the samurai, much of the cast is characterized and updated brilliantly, which given the classic nature of the source material, is a must for any would-be remake. Given the twenty-six episode timeframe, there is a great deal of character development given to the now familiar troupe of characters, especially our the titular Samurai 7, who are fleshed out in new ways, yet still faithful to the original film.

Kambei, the wizened and war-weary leader of the seven, is played true to his stoic roots. Gorobei, Shichiroji, Heihachi, and Kyūzō, the four samurai of the original film who never got much of a back-story or characterization, are each given a fitting one here, often in the form of an episode revolving around them, ranging from the showman strategist Gorobei having worked as a showman, to Shichhiroji, Kambei’s old war buddy, been given a significant other and lost his hand in a previous war, giving him reasons to be reluctant to fight again.The two that get the greatest benefit however, are Kikuchiyo and Katsushiro, whose characterization forms whole story arcs.

Kikuchiyo, the brash, clownish yet plebeian samurai immortalized by the late great Toshiro Mifune is once again here both the bridge between the samurai and the villagers and the comedy relief of the series, often to surprisingly hilarious effect. Here however, as mentioned before, he is one of the already mentioned mechanized samurai, he offers a window into that particular element of the world. Better still, purists will find his cybernetic nature is justified in how they tie it into his canon back-story given from Seven Samurai, where he was a farmer masquerading as a Samurai – here he was a farmer who, having no noble blood, could not become a Samurai, yet was willing to give up his very flesh and blood to become a mechanized Samurai, all out of a desire to wield his blade in defense of low folk like himself.

Much the same, Katsushiro, who in Seven Samurai, is characterized as the young/inexperienced one, largely preoccupied with his love interest, is here much more fleshed out, and the series proves as much his story as it is anyone’s. He starts the series an eager and idealistic youth, who took up his katana having been brought up on samurai stories, and keeps to live up to the bushido code exemplified in those same stories. As the series goes on – and especially as the conflict ramps up and the body count rises – he is visibly shaken both by how his storybook ideals don’t quite match up those needed on the battlefield, and by the horrors of war themselves, having had to kill enemies, bury friends, and realize that war is far from the glorious place he realized. His growth as a warrior and a person continues to the end of the series, where he has become a formidable samurai in his own right, and has come to terms with the realities of warfare. The whole arc is done superbly well, and having undergone a similar period of personal growth during my military service, it made Katsushiro all the more identifiable.

The seven samurai are not the only characters given much more detail. The two-dimensional love interest of the original film has been fleshed out into the character of Kirara, the Shinto priestess of Kanna village initially charged with finding and hiring the samurai to defend Kanna, and in addition to being fairly headstrong and quite vocal, the series covers a character arc of hers where she goes from very optimistic and faithful to disillusioned and giving up the role of village priestess having seen the tides of war. Rikichi, a fairly forgettable peasant from the original film save for a moment concerning his wife, is made into one of the main cast, and serves as our window into the lives of the villagers, and his arc concerning his wife is given much more time to develop, and leads to some truly surprising turns toward the tail end of the series. A number of the other cast members get some proper detail as well, especially the villagers of Kanna, albeit with mixed results, given the way some of them are drawn.

I think my sole complaint, in regards to the cast and the story, is that there isn't any true villain, certainly not on the scale or level of detail of the samurai, meaning for the most part, the bad guys are the bandits made all the more faceless by the mechanization process, and though there is something of a ‘final boss’ for the last few episodes of the show, the nature and origin of the villain are still something of a letdown, made up for somewhat given the steampunk elements and nature of his ‘evil plan’. Had there been some sort of proper villain – maybe a more developed version of the bandit chief of the film, or create a scheming shogun or wicked daimyo, someone who can provide the sort of scale of villainy needed to butt heads with seven protagonists who have been near the top of the list of most famous cinematic heroes for close to sixty years now.

As for the technical and artistic aspects of the show, as you might expect seeing as it covers perhaps the crowning achievement of Japanese cinema, the production teams wasted no effort ensuring Samurai 7 is, from start to finish, animated beautifully. As far as the animation is concerned, it is easily one of the best looking anime on the market even today – everything from the coloring to the attention to detail is absolutely top notch, especially concerning the characters and steampunk elements, outdone only by some works of Studio Ghibli, and the combat scenes especially practically pop of screen. Just as much attention is paid to both the development of the greatly expanded story and ensuring the dialog is sharp as a katana’s edge – rather important given that the series is, at its heart, a character-driven period piece. While I can’t testify how the Japanese audio sounds, seeing as I watched the English dub – what minimal Japanese I know, ironically enough, are bits I picked up from Kurosawa films – the voices all fit the characters perfectly, and the voice acting is top notch.

Overall, Samurai 7 is by and large, one of the best anime I've ever seen, and from start to finish, does honor to its lineage and source material, all the while fleshing out the story and adding the steampunk elements to great effect, resulting in a final effort that does Kurosawa proud. In addition, it’s a fine example of just what a difference there can be between a movie and a TV series or miniseries -  the detail allowed given to the characters, the story and the setting truly do set it apart from all the various adaptations of Seven Samurai, and even a Kurosawa fan like myself has to admit in some ways, it even improves upon the original work. Even if you’re not a fan of Kurosawa or anime, the series is well worth a look, and if you are a fan of one or both, I cannot urge you to watch it fast enough.