I don't even know where to begin talking about all the things that happened to me last. They weren't exactly life changing, but they certainly left me drained, but in a good way.

Let's start with my most recent article to Amazing Stories: What Happens When People Confuse Alternate History for Real History? It was about that North America without European colonization map that the Internet freaked about a couple weeks ago. It seemed to be doing rather well, but I already started to move on to what I was going to write about next week. Then last Wednesday, I noticed a surge of traffic from Amazing Stories to my blog. Investigating it I discovered that the article had been shared a ridiculous number of times (over 6000 times by the current count) and Steve Davidson, Editor of Amazing Stories, told me the article had been viewed around 50,000 times. Doing a little more digging, I learned that most of the traffic was because The Skeptics' Guide to the Universe had shared a link to the article on their Facebook page, which has over 900,000 likes.

First up, thank you so much to The Skeptics' Guide for sharing my article. I am honored you guys thought what I wrote was worth reading. Second off, I've had articles do well, specially after someone shared it on Reddit, but never something that I would call "viral". I'm not even sure if this would classify as viral, but it certainly came close. I am both humbled and ecstatic by the interest in my article. It has really gotten me to consider doing more commentary on maps from alternate histories and speculative fiction. People seem to like it and I do want to give the audience what they like. We'll see what my future in alternate cartography takes me.

Next up, I finally submitted my abstract for the Sideways in Time essay collection. Not as exciting as above, but the conference was very important to me and I look forward to working again on my history of the online alternate history community. I've still been keeping track of important events of 2015 and hope to write a short recap of the year in December. I will keep you posted if it gets accepted, but in the meantime, if you guys would like a brief taste of my essay, check out my presentation at the Sideways in Time Conference:
Speaking of my channel, I took a comment regarding my next Trope Talk episode and ran with it. I wrote perhaps the longest script yet for my channel...and I'm not sure when I will ever film it. Filming and editing are both time consuming and my next bloc of free time may still be weeks away. I may write another, shorter script just so I have something to film and release for you guys in the near future.

Well those were the big things I wanted to talk about. Before we get to the week's news, I wanted to remind you all that you can support many of my alternate history endeavors by becoming one of my patrons on Patreon. There are a lot of cool rewards and milestone goals for you guys to check out, so please consider signing up. It will help me a great deal in keeping the blog and channel going.

Finally, I am taking Labor Day off next week, so no Weekly Update or Map Monday post. Those will return on September 14th.

Headline: The Future State of Kurdistan 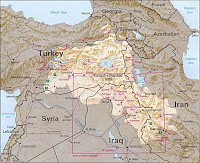 Recent events have made it more and more likely that we may see a Kurdish state in the near future. There has been a lot of buzz on the Internet about it and I have seen several alternate history maps and scenarios featuring the state of Kurdistan. So I decided a brief summary of the potential state is in order.

For those who don't know, the Kurds are a Middle Eastern ethnic group with their own culture and language. With a population between 30 and 37 million people, they are perhaps one of the largest ethnic groups in the world without their own state. The Kurds have taken the center stage recently due to their effectiveness at fighting ISIS. Currently, the Kurds have an autonomous province in Iraq, defacto control of Northern Syria (known for their vaunted all-female fighting units) and large populations in Turkey and Iran.

The idea of an independent Kurdistan is nothing new, but with the chaos currently engulfing Iraq and Syria, an independent Kurdish state seems more likely by each passing day. Most governments, however, are against the idea. Part of it is the desire to maintain the status quo, but they also don't want to jeopardize peace negotiations with Iran or offend Turkey, which has been an ally of the western democracies (although considering the ongoing allegations of Turkish support for ISIS, perhaps the Turks deserve to sweat a little for their actions in prolonging the war). While the diplomatic arguments make a certain amount of sense, the desire to maintain borders as they are seems to cause more problems than they solve, especially in this post-colonial world.

One of the theories regarding the never-ending conflicts in the Middle East is that the borders created by the European colonial powers following WWI have instigated the current conflicts. Many of these borders don't actually reflect the reality on the ground, and when you consider the Kurds found themselves divided between 4 separate nations, this starts to make a certain amount of sense. On top of that, the Europeans tended to favor a minority ethnic/religious group in Syria and Iraq, to help them govern the country against the majority ethnic/religious group. These borders and power structures remained in place after decolonization and were propped up during the Cold War. Once ISIS is defeated, returning things to the status quo is frankly stupid, as the same issues that led to ISIS' rise while still exist. It is also a poor way to reward the Kurds for being one of the most reliable opponents of the terrorist state.

I'm not saying the situation isn't complicated, but its about time the western democracies accept the fact that a Kurdish state is likely to happen whether they like it or not. I don't see the Kurds disbanding their armies and immediately following the orders of Damascus and Baghdad, especially when they spent the last years doing fine without them. If the western democracies don't recognize them, then the Kurds will just turn to Russia or China for support and the West will lose more influence in the region.

On top of that, I think its just the right thing to do.

This week's nod for the best alternate historian goes to the master himself: Harry Turtledove. Yeah, I know, it goes against the spirit of this weekly recognition to give it to Harry, but I enjoyed his article on Feed Your Need to Read where he shared his three tips for writing alternate histories while out promoting his new anthology, We Install: And Other Stories.

Additionally, when I reshared by What Happens Next: SM Stirling's Nantucket Trilogy, someone suggested I should do a What Happens Next on Turtledove's Worldwar and Colonization series. At first I wasn't that interested since Turtledove already did that himself with Homeward Bound, but I couldn't help thinking about what intergalactic politics would be like in his universe if you jumped ahead to 2100. I thought about it enough that you should prepare to see another What Happens Next sometime later this week. So with that said, that is why I am giving the nod to Turtledove this week. Both for his excellent article and for inspiring another future article of mine.

Honorable mention this week goes out to Ian Sales. Go check out his recent interview at Nerds of a Feather, Flock Together.

I know not all of my readers like steampunk, but you got to admit this steampunk Iron Man hand is pretty cool: 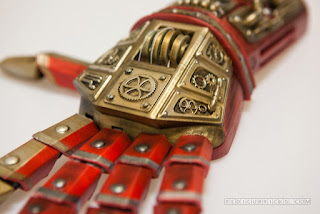 I found this photo on Geek Art Gallery, but the original creator is Jacky Wan (Valcrow). The fact that this is also a 3D printed object makes me extremely excited for what other things 3D printers can provide for us in the future.

Honorable mention this week goes out to this Steampunk Sidecar Tricycle photo.