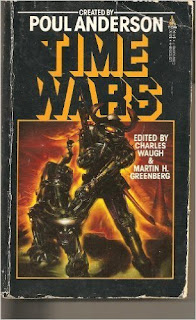 After being disappointed by the last book I read, I decide to seek out new stories from the past. Thus I picked up a copy of Time Wars, an anthology of time travel stories focusing on conflicts, created by Poul Anderson and edited by Charles Waugh and Martin Greenberg. To be honest I was unsure why Poul Anderson got a "created by" credit on a book that had two additional editors as well. Did he come up with the idea, did he do any editing or did he get paid extra to have his name put on the cover to attract readers? My preliminary research couldn't find any answers, so if anyone knows the answer, please share it in the comments.

As I mentioned earlier, Time Wars is an anthology of short stories dealing with wars and conflicts involving time travel. The stories included in the anthology were originally published between the 1940s and 70s, making them old by today's standards. Since this is primarily a time travel anthology, there are only a few stories dealing with alternate histories (three to be exact) each written by a famous alternate historian. Since this is an alternate history blog, I will focus my review on them and hopefully you will see that, to be frank, they are the exact same story.

The first story is "Gunpowder God" by H. Beam Piper. Also know as Lord Kalvan of Otherwhen, this is the only Lord Kalvan tale and full-length novel in the Paratime series written by Piper. For those unfamiliar with the Paratime series, it tells the tale of Verkan Vall of the Paratime Police. His people have learned the secret of travel between the timelines and maintain their technological civilization by secretly exploiting their temporal neighbors. Verkan Vall and other officers of the Paratime Police, protect the secret of the multiverse from other civilizations and take down their own people if they go too far in their dealings with other timelines. The series has some odd elements to it. For one thing human civilization actually began on Mars and the different timelines are categorized by how successful the colonization of Earth went after society collapsed on Mars. Still even with the crazy ideas about ancient history, it still is a good series and I highly recommend it.

But what about "Gunpowder God" by H. Beam Piper? Well its a little short to be a novel, which makes me think it may have been an excerpt edited to fit into the anthology. It takes place after the events of the last Paratime story and features Verkan Vall in a few scenes. A Pennsylvania state trooper, by the name of Calvin Morrison, is accidentally transported into an alternate timeline where the Aryans crossed the Pacific Ocean and settled on the West Coast of North America, eventually expanding to the East Coast and by the time of the story have a Late Middle Ages/Early Renaissance level of technology. At first Calvin (or "Kalvan" as its pronounced by the natives) thinks he has traveled into some post-apocalyptic future, but begins to realize he may be living in a completely different history altogether. He ingratiates himself with the locals by helping them fight their enemies, teaching them how to make gunpowder and showing them some other tricks, like rifling. Meanwhile, Verkan Vall tracks him down and waits to see whether he will have to kill Calvin to protect the secret of the multiverse.

"Gunpowder God" has an old style of writing, but the pace is good and the worldbuilding is excellent. I like how Piper didn't hold the reader's hand while introducing his world. Also this may be one of the earliest appearances of the "strong, independent woman" character. All in all an enjoyable story that I can recommend that puts me in the mid of Lest Darkness Falls and other tales when some find themselves in a different time and decides to make the best of it.

Next up we have Poul Anderson's contribution to Time Wars: "Delenda Est". This universe also involves a temporal police force called the Time Patrol. They were formed by an advanced race of humans from the far future who recruited people from across history to protect history from the meddling of rogue time travellers. Because the Time Patrol is meant to keep history on the same track, alternate historical content is minimal in the series, but "Delenda Est" is one of the few exceptions. Take a look at the world map that goes with it:

Our hero, Manse Everard, is vacationing in prehistoric times at a ski lodge in the  Pyrenees when he decides he is bored and leaves with his half-Dutch, half-Indonesian Venusian friend Piet van Sarawak from the 24th century to look for some good times in Everard's 20th century New York. Things go awry when they arrive in a Manhattan full of Celts and Indians who use steam technology and still believe in magic. Manse and Piet are arrested and separated from their time machine, while the locals believe they are sorcerers and want to use their magic to fight in an upcoming war. Now they need to escape and find out what happened to their timeline. When Manse learns that the Roman Empire never existed in this history, he begins to suspect someone prevented the rise of Rome, but he still needs to find the right point of divergence so he can set things back the way they were.

The writing style is a lot better than Piper's "Gunpowder God" and I would argue the characters were more fleshed out as well. I don't want to spend this entire review comparing one story to the others, but I will say the people and nations in the Celtic-wank that Anderson created will be a lot more recognizable to the average alternate historian, but that won't necessarily make them good. Piper's cultures were much more original, while Anderson depended too heavily on space-filling empires. Still on its own, "Delenda Est" is a good story and another solid recommendation from yours truly.

The final story we are going to cover from Time Wars is "Run from the Fire" by Harry Harrison. In this story, an attorney by the name of Mark Greenberg is hired by two mysterious men to come with them to their warehouse and then leave and spend some time in New York City before returning. He goes with them, but when he leaves the building he discovers he has been transported to a New York City that is occupied by South Africa in a world where the polar ice caps is melting. After almost being killed by South African soldiers, Mark learns that the men (well one is actually a robot) are from a different timeline where the sun is going nova and they are hoping to resettle their people on a different timeline. The problem is that on most timelines the sun is or will be going nova, thus they are in a race against the hated sun to save as many people as they can by finding enough timelines where the sun is stable. Mark's actual job is to investigate a timeline where Europe is still under feudalism and the Iroquois dominate North America and find out what happened to one of their agents whose job it was to convince the Iroquois to leave their timeline (which will soon be destroyed by the sun) for another timeline where human life never arose.

Although there is no police force, "Run from the Fire" still features an organization that uses and protects travel between alternate timelines. The writing style is more similar to Piper (there I go again, I just can't help myself from comparing these stories), but the worldbuilding is also more like Piper's as well. Oddly enough, the South Africans of "Run from the Fire" reminded me of SM Stirling's Draka. Considering that "Run from the Fire" predates Marching Through Georgia, I wonder if Stirling got the idea for the Draka by reading this story. I couldn't find anything connecting the two stories, but I wouldn't be surprised if the story didn't have some influence on Stirling, if he actually read it. Anyway, "Run from the Fire" isn't a bad story, but it is the weakest of the three I read here. I think it still deserves a read, but you are going to have to be someone who really enjoys Harrison's writing (like myself) to enjoy this one.

As for the rest of the anthology, well I can honestly say I enjoyed it. All the stories were fun to read and only once was I actually confused and had to double back in an effort to understand the time travel logic. Time Wars was a fun, but quick, read and if you get a chance, I recommend you pick up a copy.