Alternate American colonization timelines are one of my favorite kinds of timelines. I enjoy it when people speculate about different cultures settling different areas of the Americas then what happened in OTL. So I naturally gravitated to this map by thomas.berubeg when he posted it for one of AlternateHistory.com's many map contests: 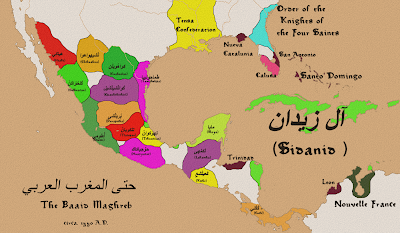 This is actually just one of many maps Thomas included in his short scenario: "The Age of Exchange (The Far Maghreb)". In this alternate timeline, the Viking colony of Vinland is more successful, leading to an earlier die off due among the Native Americans. Although contact is eventually lost with the colonists after the Little Ice Age, knowledge of the New World is more widespread leading to the Sultan of Morocco to send an expedition to rediscover the continents in 1421, sparking a Muslim colonization of Middle America and the conversion to Islam by many of the more advanced Native American states who had recovered from Old World diseases.

This world has Muslim Mesoamericans, English knights in the South and a lost colony of Vikings, what more could you ask for? On top of that the map itself is well done and I liked the use of the Arabic script. If you haven't already, go check out Thomas' scenario.

Honorable mention this week goes out to Rick Noack's upside down map quiz on The Washington Post. If you want to submit a map for the next Map Monday, email me at ahwupdate at gmail dot com with your map attached and a brief description in the body of the email.