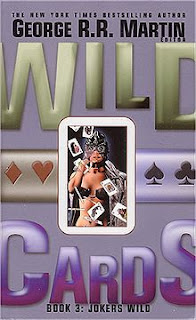 I talked originally about reviewing this on my channel, but I think instead I am going to focus more on my Trope Talk series instead (next episode TBA). So now I will review Jokers Wild, the third volume of the Wild Cards shared universe, edited by Sharknado 3 star, George RR Martin.

Jokers Wild takes place shortly after the events of Aces High on Wild Cards Day, the 40th anniversary of the day when an alien virus was released over New York City, killing most of the people that contracted it and horribly disfiguring the few survivors, except for those lucky enough to gain superpowers. The Astronomer and his followers are taking revenge on those Aces who defeated their attempt at world domination by killing them one by one. While Fortunato and others race to stop him, an Ace named Wraith steals some notebooks from a wealthy New Yorker, but soon discovers he is a powerful criminal who will stop at nothing to get his property back. On top of that, Sewer Jack learns his niece ran away from home and is alone somewhere in New York City. As he seeks her out he enlists the help of his friend Bagabond who also...okay lets just say there are a hell of lot of subplots going on at once.

If everything above sounds confusing, it is. Not only is Jokers Wild a book where you need to read what came before, the problems are compounded by the fact that this is a "mosaic novel", where different short stories from various authors are edited together to tell one story. Now the previous two books in the series had overarching themes that tied many of the stories together, Jokers Wild on the other hand, is presented as one story told by seven different authors, including Martin, with each author writing for a different point of view character. I have to give them credit for putting together a readable novel with that many minds/egos, but the finished product is still rather rough. Transitions don't always flow well with characters changing drastically as points of view switch. I can forgive them, however, since this was their first time and considering the Wild Cards series now has over twenty volumes, perhaps later mosaic novels are more polished now that they have more experience.

I am not going to nitpick all the issues with the book, but I do want to point out how clumsily the Sewer Jack "reveal" was handled. Turns out he is gay and before you get angry, trust me, it really isn't much of a spoiler. They pretty much broadcast that fact on a giant neon sign almost straight from the beginning. A beautiful woman wonders why he is uninterested in her advances, he looks for his niece in a gay bar that he implies he has visited once or twice, he gets really upset when a random stranger calls him a "fag", his male friend who he has strong feelings for has HIV, he knows a lot about women's makeup...wait, what? Maybe its just because I am a heterosexual, but I don't think being gay means you immediately know how to apply makeup competently!

To be fair this book was originally published in 1987, and presumably the stories themselves were written even earlier, so just having a gay major character in a book marketed to the general public was a pretty big deal. I mean there were some states that still were enforcing anti-sodomy laws. Critics I listen to have pointed out that writers in the 80s and 90s really didn't know how to write gay characters and often fell back on stereotypes and cliches. So perhaps everyone involved can be forgiven for this issue, especially because even with all of my negativity above, I can still recommend this book.

What is great about Wild Cards is that it presents a surreal superhero universe where things don't quite work out the way they would in the comics. Most of the people who survived the Wild Cards virus are grotesque monstrosities and have been relegated to the lowest rung of society because of it, even if they do have a superpower. Even those who kept their normal, human looks don't always get useful powers (i.e. being able to fly, but not lift anything up because you are not strong enough or gaining magical-esque powers, but to recharge you have to have sex and never ejaculate). Even the "heroes" come off more like reality TV stars than actual heroes and the few traditional vigilantes are often viewed at best as menaces and at worst serial killers. That is all on display throughout the book and it was those elements that kept me reading until the end.

Jokers Wild is a bizarre and fun breakdown of the usual superhero tropes and if the technical side of the book is rather weak, the universe Martin and his friends created more than makes up for it. Go check out Jokers Wild, but make sure you read the first two books first.