So this week we begin the new format not only for Weekly Updates, but also for other long running series like Map Monday and Videos for Alternate Historians. Thanks to my new social media strategy, I will be factoring your reaction to alternate history news, maps videos and other posts when I decide what to feature on the main blog. Please be patience as I iron out all the kinks, but I think you guys are going to like what you see in the coming weeks.

Moving on to other projects of mine. I think I have decided that a video once a month for my channel is a reasonable goal for me once I factor in my personal schedule. This month, I will be making a video review of Wild Cards III: Jokers Wild edited by George R.R. "I will destroy everyone you love" Martin. So stay tuned for that one.

They was a lot of excitement when I shared pictures from the set of Amazon TV's The Man in the High Castle. Here is a brief taste below: 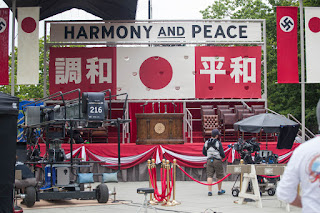 And why wouldn't they be excited? It is a classic work of science fiction and alternate history. Plus the pilot episode was a hit with both audiences and critics. Now that Amazon is producing a full season of the show, alternate historians everywhere are obviously excited. This may actually be the show that treats are favorite genre seriously and helps break it into a mainstream audience.

If you need other reasons why you should read The Man in the High Castle, just take a look at this edition from 1975 that is being sold for $250. Or how about this beautiful edition from The Folio Society that John DeNardo of SF Signal called the "definitive volume" of the novel. Just look at some of the illustrations you can find in the Folio Society edition: 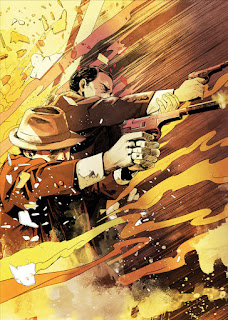 Fans of grand strategy games will be happy to learn that Paradox has announced the eighth expansion for Crusader Kings II called The Horse Lords. In this expansion you can play as the powerful nomadic hordes who built massive empires across Asia and Europe. Check out the trailer below:
Features include an expanded map, nomads that resist settlement, revised interface, clan politics, the Silk Road, tributaries, forts and new rules for successions and trade. Horse Lords, however, is not the only expansion Paradox has coming out and last week they showed the final developer diary for Europa Universalis IV: Common Sense:
You can check out the text version they posted on their forum here. Additionally, a patch featuring additional content for Europa Universalis IV will be available to all players free and without having to purchase Common Sense, which will launch across all territories for Windows, Mac, and Linux tomorrow on June 9th.

What you may have missed...

We end today's Weekly Update with brief comments on some of the popular articles from the week before. First, go read The Times of Israel's coverage on Dr. Jeffrey S. Gurock's new book: The Holocaust Averted: An Alternate History of American Jewry, 1938-1967. I think this article and book highlight an important rule of alternate history, which is that averting a horrible historical tragedy doesn't necessarily make the world a better place for everyone.

I also highly recommend you guys check out SciFi Ideas' list of alternate history scenarios. It was one of the most viewed links on our Facebook page and its author, Mark Ball, was even nice enough to drop by to chat. Most importantly, it has with it probably one of the most awesome flag designs I have ever seen (see right).

Meanwhile, for those writing timelines that don't feature Christianity becoming a dominant religion, check out this fun article from Rick Paulas of Pacific Standard that asks "what year would it be without Christianity?" Its a good question because, honestly, there is no real standard date, even today among the different nations and cultures of the world. In fact the lessons from the article can apply to anyone who is creating their own fictional calendar.

Finally, for those who like traditional history (and let's be honest, you wouldn't be here if you didn't) don't forget to check out this informative article on Viking armor on io9. Spoiler alert: not only did they not where horned helmets...they also didn't wear much protection to begin with.